The flood situation in Afghanistan has worsened over the last few days as heavy rain has continued to fall.

On 16 May, at least 34 people had died and 4 injured in flash floods in Afghanistan.

An update by Afghanistan Natural Disaster Management Authority (ANDMA) of 20 May reported that the total number of flood related deaths now stands at 72, with 9 people injured, 888 houses destroyed and 1,695 damaged.

As of last week the flooding had affected the provinces of Samangan, Takhar, Kapisa, Baghlan, Badakhshan, Badghis, Ghor, Panjshir, Sari Pul, Ghazni and Parwan. Over the weekend, Balkh and Herat provinces were also badly affected. Afghan news agency Pajhwok reported on 19 May that at least nine people died after flash floods hit houses in different districts of northern Balkh province

The Government of Afghanistan also said on 20 May that flooding had affected parts of Jowzjan Province.

Afghanistan Meteorological department warned of further rain (up to 30 mm) and potential flooding in north eastern areas of the country, in particular in Baghlan and Parwan. 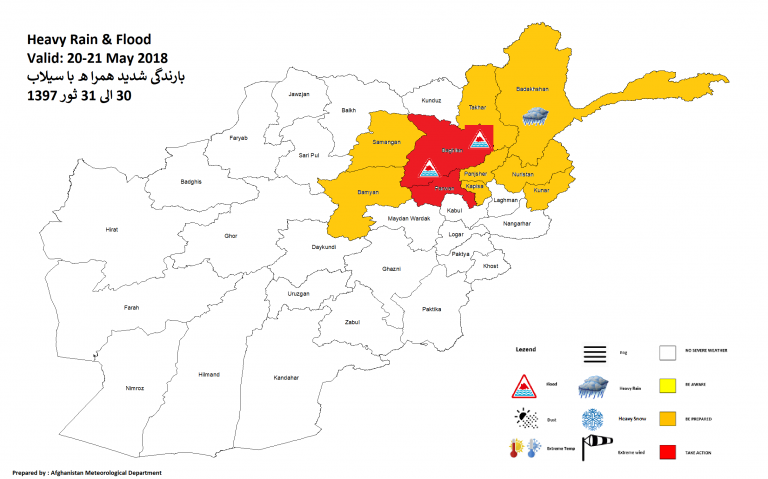 21 MAY, 2018 BY RICHARD DAVIES The disaster management agency in Guatemala, CONRED, reports that the heavy rain and flooding in several areas of the country has now affected 76,845 people. Over 30 incidents of […]

Rivers overflow after days of heavy rain lash the Caribbean island nation, washing away roads and bridges. by Everton Fox     20 hours ago A prolonged spell of torrential downpours has led the Meteorological Service […]