Hundreds of Australian firefighters are tackling a large bushfire that has reportedly affected homes homes in the southern suburbs of Sydney.

The New South Wales Rural Fire Service (RFS) said it was concerned that flying embers could spark new blazes ahead of the advancing fire front.

Some residents have been instructed to seek shelter as evacuation is now too dangerous.

Recent weather in south-eastern Australia has been unseasonably hot.

Shane Fitzsimmons from the RFS said the fire was behaving “very aggressively”.

Strong winds have been pushing the flames north and east towards suburban areas.

Passengers on a suburban train have filmed dramatic scenes as the railway took them through the burning countryside, surrounded by thick smoke and flying embers. 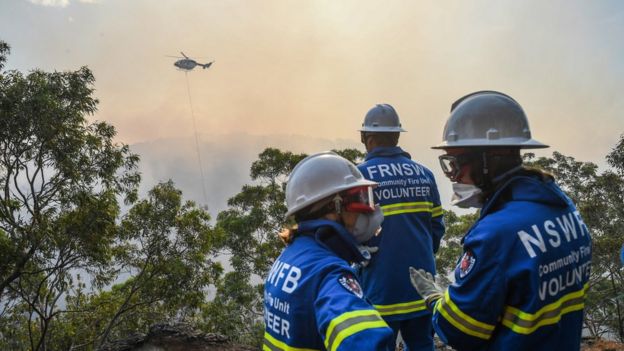 Water-bombing helicopters are fighting the blaze

The fire has burned nearly 2,500 hectares of land, the RFS said.

More than 70 fire appliances were stationed along roads dividing bushland from homes while helicopters were dumping water on the fire from above, SBS reported.

“It is unseasonably hot and that’s a matter of obviously great concern, but we have to deal with the worst that Mother Nature can throw at us and the worse Australians are presented with by nature, the better it brings out the Australian spirit,” he said.

New South Wales police have declared the area a crime scene but the RFS says it is too early to know if the fire was started deliberately, SBS reported.

by Peter Hannam Sydney’s late-season heatwave is on course to deliver the city’s hottest trio of March days since 1902, with another burst of warmth coming next weekend. Monday’s forecast top of 30 degrees may be […]

Homelessness soars by 14 PER CENT in the past five years – with more than 116,000 people sleeping on the streets tonight across Australia