Thousands of people have evacuated their homes in British Columbia, Canada, after major flooding in the province that began on Thursday, 10 May 2018.

British Columbia Premier John Horgan said, “The spring flood season is upon us. Heavy rainfall, warm weather and rapid snowmelt have triggered flood warnings and evacuations in the Interior. More than 4,000 British Columbians have been forced from their homes, while thousands more anxiously wait to see what rising flood waters will mean for their homes and their livelihoods.”

Evacuation orders affecting over 2,700 people were issued in parts of Kootenay Boundary, from Christina Lake through the West Boundary, including areas of Grand Forks. Firefighters rescued around 30 people by boat in Grand Forks, located at the confluence of the Granby River and Kettle River and one of the hardest hit areas.

On 10 May Regional District of Kootenay Boundary said via Social Media, “Grand Forks. Rivers have not peaked yet. 30cm above 200 year record based on Kettle River Ferry gauge in the US. Peak could last several days or more. Be safe and please don’t drive through flooded areas.”

The Emergency Info BC website listed evacuation orders or alerts in six other regional districts and eight First Nations around the province.

Okanagan-Similkameen district has also been badly affected, with evacuation orders issued in Osoyoos after the level of Osoyoos Lake rose dramatically.

As of 12 May, British Columbia’s River Forecast Centre had in place Flood Warnings and Flood Watches for Bulkley, Nautley, Nechako and Dean Rivers.

The flooding is caused by warm weather melting heavy snowpacks making rivers and streams overflow. More flooding is expected next week as high temperatures are forecast, which could mean a second wave of flooding for Grand Forks.

Officials say this year’s flooding is worse than the devastating floods of 1948. Canadian Press reported that 3 of the region’s rivers – the Granby, Kettle and West Kettle – all broke 1948 water level records by about 60 centimetres, according to Chris Marsh, emergency operations centre director for the Regional District of Kootenay Boundary.

Other areas of Canada have been also been affected by snowmelt floods over the last few weeks, in particular in parts of New Brunswick and Alberta. The flood water in British Colombia rivers has made its way downriver and into Washington state, USA, where the governor has declared a state of emergency. 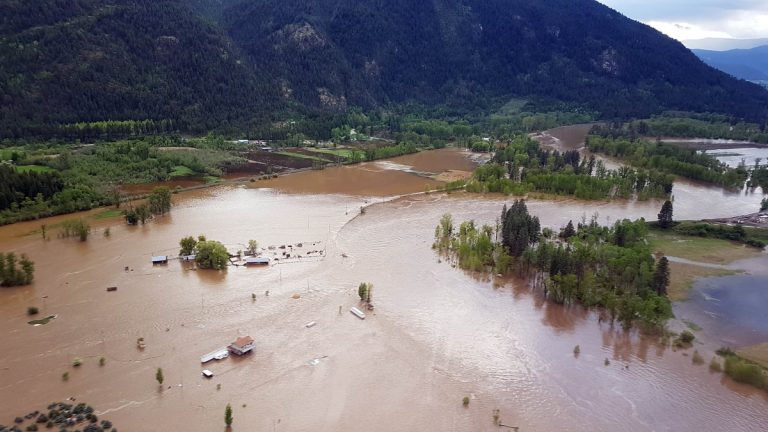