The death toll from severe weather has risen across Europe, with at least 23 casualties in Poland alone amid sub-zero temperatures, officials say.

Shelters have been opened as the plight of rough sleepers is a major concern. More than 60 people have died across the continent, AFP news agency reports.

Meanwhile most transport and flights have been suspended in Ireland where thousands were left without power.

The unusually cold spell brought by a Siberian weather system was being felt as far south as the Mediterranean.

Where are the problems?

The system has been given various nicknames – in the UK it is “the Beast from the East”, while the Dutch call it the “Siberian bear” and Swedes the “snow cannon”.

It met Storm Emma on Thursday, causing blizzards and strong winds in parts of England, Wales and Ireland.

Flights in and out of Dublin and Cork airports in Ireland were suspended until Saturday at the earliest. All schools in the country were shut and people were urged not to drive.

Trains stations were also closed until at least midday on Saturday, and all non-urgent surgeries were cancelled by the country’s health authority.

Army forces were called in to help the civilian workforce in both Britain and Ireland.

Some rail services operated by Eurostar between London, Paris and Brussels were axed.

The airport in the Swiss city of Geneva was also temporarily shut, but has since reopened – warning that further delays and cancellations should be expected.

In parts of central Italy, ice forced the closure of several roads and railways.

Also on Friday, at least four people were killed in an avalanche near the ski resort of Entraunes in the French Alps.

In Ukraine, all schools and higher education institutions were told to close in an effort to save gas, after its Russian supplier refused to deliver more fuel.

Energy giant Gazprom said it was severing its contracts with Ukraine after a Stockholm court ruled against it in a long-running legal battle.

Where have the deaths been?

In Poland, most of the victims were rough sleepers.

The deaths are partially attributed to a combination of the severe cold and alcohol consumption by homeless people, who drink hoping to warm up, the BBC’s Warsaw correspondent Adam Easton reports.

When the night time temperature is -15C (5F), as it has been all week in the Polish capital, this is a deadly combination, our correspondent adds. 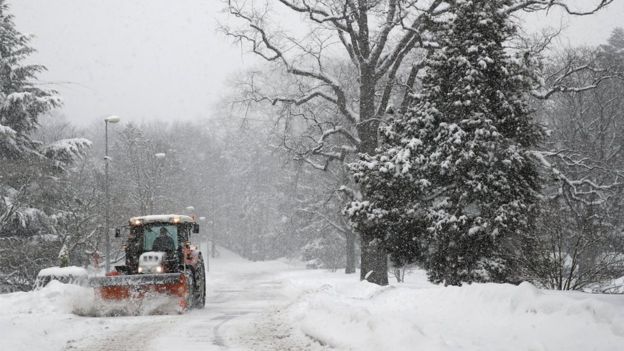 A tractor removes snow at the UN European headquarters in Geneva

Over the past week, the cold weather has killed seven in Slovakia, six in the Czech Republic, five each in Lithuania and France (excluding the avalanche victims) and at least three in Spain, according to AFP.

Italy, Romania, Serbia and Slovenia have all counted two deaths each, while one person has died in Britain. The Netherlands, Sweden, and Norway each also recorded one weather-related death.

In Spain, one of the three victims was a homeless man who had been sleeping in an abandoned truck.

In France, another homeless man died in an abandoned home in Lens of smoke inhalation after lighting a fire to stay warm, AFP said.

What is the forecast?

The conditions have already improved in some parts of Europe, and the temperatures are expected to rise over the next couple of days.

The northeast of Europe is expected to remain cold, however – and relatively cold weather is likely to continue in parts of the UK and Ireland.

Written by Xuefeng on Feb 10, 2018 Translated by Xidai and Edited by Kaer Last night, the outside temperature was -28°c (-18½°f). We could have been at the North Pole! Standing outside for even a […]

Winter ends in Europe – or does it?March 20 was the last day of winter, but after such harsh weather conditions the signs of spring will be slow to come

21 MAR 2018 Winter in Europe has lately been dominated by incursions of Arctic cold air, chilled underneath an anticyclone centered over northern Sweden. This set up was caused by sudden stratospheric warming which has […]

The change of the climate is going on every day.