A stormy holiday weekend (26 to 28 May, 2018) in the UK saw 136,000 lightning strikes across the country, along with heavy rainfall and flooding in the West Midlands and parts of Wales.

Police say that an elderly man has died after his car was submerged in water during the flooding in Rushall, an area of Walsall in the West Midlands, about 15 km north of Birmingham.

In a statement, West Midlands Police said “A man has died after his vehicle was submerged in flood water in Walsall following flash flooding that hit the region. Police were called to Lichfield Road, Rushall, just after 2am today (Monday 28 May) to reports that a vehicle had entered the water. The victim, who is believed to be in his 80s, was taken to hospital but pronounced dead a short time later.”

A number of roads in the Birmingham area, including Walsall, were badly affected by the flooding after torrential rain fell overnight. Warwickshire Fire and Rescue Service (WFRS) said their control room was extremely busy dealing with flooding calls and crews have visited many properties to assist where they can with flooding. WFRS Technical Rescue Unit said they carried out multiple rescues from cars, buses and homes.

WFRS asked people to avoid the areas of Flecknoe, Willoughby and Lower Shuckburgh which were affected by fast flowing water late on 27 May. Warwickshire police reported flooding in the Lapworth and Hockley Heath areas, Lower Shuckburgh, Earlswood Lakes and Rugby. Five buildings in Warwickshire were struck by lightning during the storm.

Flood water up to 1 metre was reported in Welshpool, Powys, about 75 km west of Walsall and flooded areas of Birmingham.

Homes, roads and vehicles were damaged as well as the Victoria Memorial Hospital, according to local media.

The UK’s Met Office said that Winterbourne in Edgbaston (Birmingham), recorded 53.6 mm of rainfall in just one hour on Sunday afternoon, and 93.6 mm in a 24-hour period. The May monthly average for the area is around 55 mm.

Bala in Gwynedd, about 40 km north west of Welshpool, recorded 54 mm of rain in 24 hours.

The Met Office had issued an Orange (mid-level) warning for heavy rain across a narrow patch over North Wales and the West Midlands. 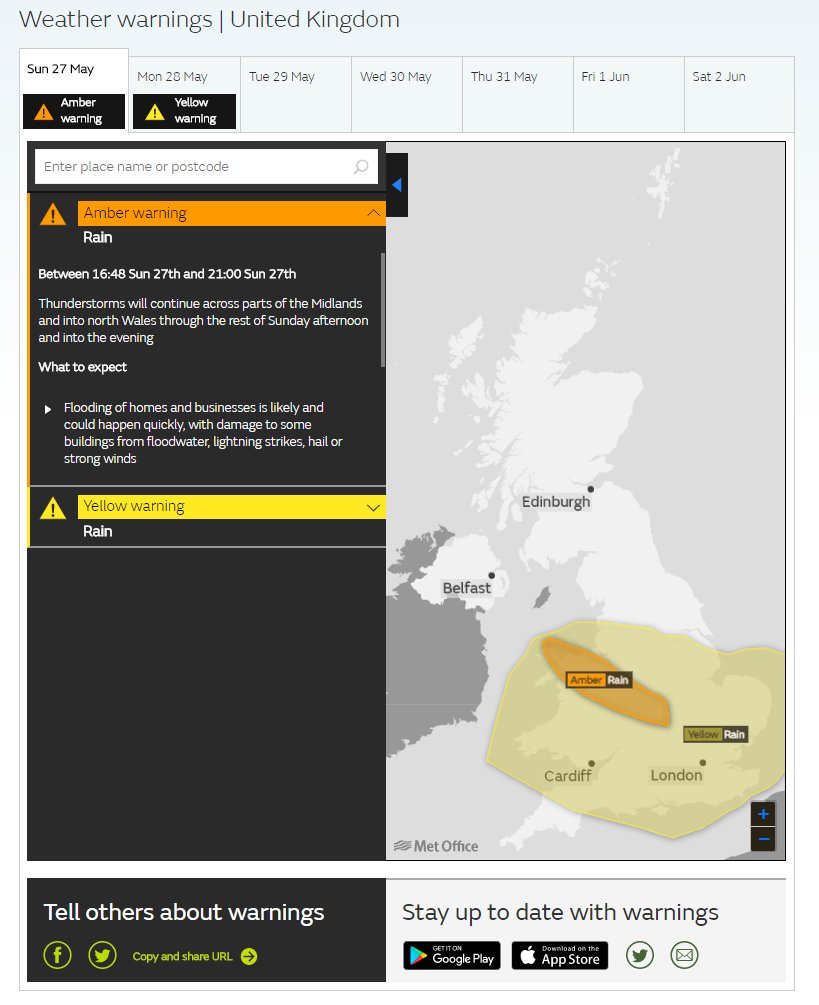 Of climate change and Kenya’s rains

Warm ocean boosts East Africa’s rain in a wet season that has already left more than 130 people dead. 16 hours ago Kenya’s woes have just increased after a dam burst in Nakuru on Wednesday […]

That didn’t last long! Spring heatwave is put on pause after warmest day of the year so far as rainy skies are set to return…but Britain will be hotter than California next week