The UK is set to see its hottest day on record, with temperatures on Tuesday expected to reach up to 42C (107.6F).

The Met Office has issued a red extreme heat warning covering much of central, northern, and south-east England.

Provisional figures showed the UK experienced the warmest night on record from Monday into Tuesday.

Temperatures did not fall below 25C in places, exceeding the previous highest daily minimum record of 23.9C recorded in Brighton on 3 August 1990, the Met Office said.

Emley Moor in west Yorkshire could have broken the record, where 25.9C was recorded overnight, according to the Met Office.

Scotland could see its highest day on record, surpassing the 32.9C set at Greycrook in the Scottish Borders in August 2003.

The hottest places in Scotland yesterday were Aboyne in Aberdeenshire and Leuchars in Fife, both with highs of 31.3C.

As temperatures rapidly rise, already reaching 30C in some areas, emergency responses have been issued across the UK:

The extreme warning, indicating a threat to life, is in place in an area stretching between London, Manchester and York.

Thermometers were reading 35.1 at Kew Gardens, west London, at 10:00 on Tuesday.

There was a markedly cooler outlook for Penzance, Cornwall, where thundery storms hit the popular holiday destination and were projected to last until midday.

But by 16:00, Lincoln, Cambridge and Huntingdon could see 40C – and areas in the A1/M1 corridor may surpass this. 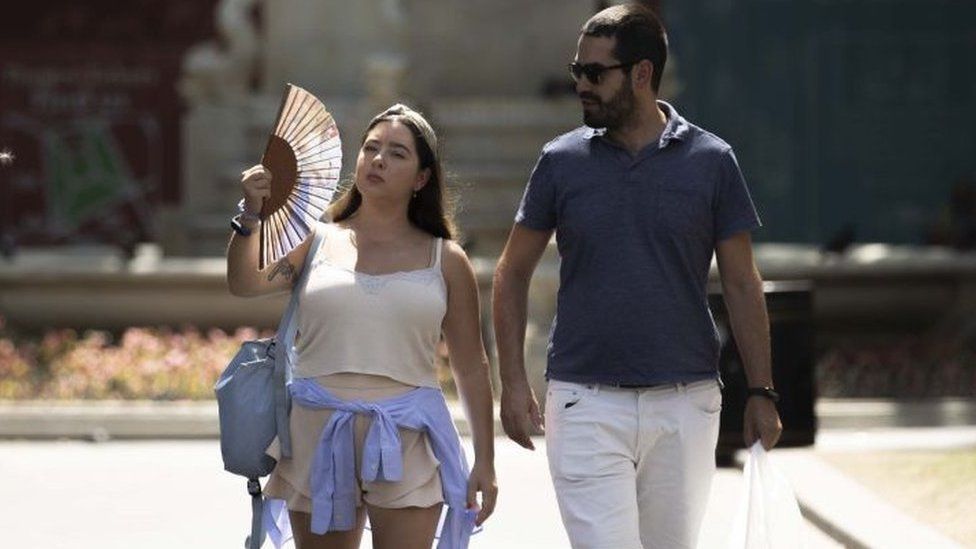 Jake Kelly, the group director for system operation at Network Rail, said it had taken “the difficult and regrettable” decision to close the East Coast Mainline and the Midland Mainline due to record temperatures.

Mr Kelly told BBC Radio 4’s Today programme: “We don’t take decisions like this lightly. Our engineers work very hard assessing the capability of the infrastructure facing that record heat, and we decided that we had no choice but to close it.”

Transport Secretary Grant Shapps said the UK’s rail network could not cope with the extreme heat, adding that it would take “many years” before upgrades would mean services could handle the hotter climate.

“The simple answer is no, the network cannot cope with the heat right now,” he told BBC Breakfast. “In 40C heat, tracks can reach 50C, 60C, and even 70C, and there’s a severe danger of tracks buckling and a terrible derailing.

“We are building new specifications, creating overhead lines that can withstand higher temperatures. But with the best will in the world, this is infrastructure which has taken decades to build, with some of our railways stretching back 200 years.”

Runways at Luton Airport and RAF Brize Norton were impacted by the heat on Monday – forcing aircraft to divert.

There have also been warnings of pressure on hospitals and ambulance services as temperatures are set to peak on Tuesday afternoon.

Health Secretary Steve Barclay said more call handlers had been put in place and additional funding had been made available for ambulance and 111 services.

London Ambulance Service said it fielded 6,600 calls on Monday related to the heatwave, experiencing a peak of 300 calls at 23:00.

Brian Jordan, Director of 999 Operations at London Ambulance Service, said he was “very pleased” that the number of callers fell short of the 8,000 expected.

“Yesterday was still a busy and long day, and I cannot emphasise enough that people need to follow the same advice as Monday and avoid exposure to the sun,” he told the Today programme.

“Early indications show a slight increase in fainting due to heat exposure. We could see this rise in even higher temperatures today.”

He added that the service had “been working really closely” with hospitals to ensure waits are not longer than normal.

Monday saw a number of schools close despite government advice against doing so, although one teaching union said the majority of schools had remained open.

Water companies in southern and eastern England have warned increased demand is leading to low pressure – and even interrupted supply – for some households.

Heatwaves are becoming more likely and more extreme because of human-induced climate change.

The world has already warmed by about 1.1C since the industrial era began, and temperatures will keep rising unless governments around the world make steep cuts to emissions.

We are living in the hottest period for 125,000 years, according to the UN’s climate science body, the Intergovernmental Panel on Climate Change.

Meanwhile, farmers warned the UK is not equipped to deal with water shortages caused by the changing climate.

Minette Batters, the president of the National Farmers’ Union, said the unprecedented temperatures are “really highlighting issues with water security”.

“It’s not a full-blown drought yet, but we really need to be focusing on what needs to be done before it gets worse,” she said.

The peak temperature reached on Monday made it the third-hottest day on record and the hottest of the year so far.

A temperature of 37.1C was measured in Hawarden, Flintshire, making it the hottest day on record for Wales, according to provisional figures from the Met Office.

Scotland and Northern Ireland also saw their warmest days of the year, with temperatures of 31.3C and 31.1C recorded in Aboyne, Aberdeenshire and Derrylin, Co Fermanagh respectively.

Following several deaths, people are being urged not to cool off in open water. “Whilst it may seem tempting on a hot day, please don’t get in the water,” the Canal & River Trust said.

Much of Europe and North Africa is also experiencing extreme heat with wildfires breaking out in France, Spain, Portugal, Greece and Morocco.

How have you been coping with the heatwave? You can get in touch by emailing haveyoursay@bbc.co.uk.

Please include a contact number if you are willing to speak to a BBC journalist. You can also get in touch in the following ways:

https://www.bbc.com/news/uk-62217282
About Tongxin 142 Articles
Permanent member of New Oasis for Life community since Aug 2010. Working in the field of international promotion and connection of the new life mode under the guidance of 800 Values for New Era Human being. Continue supporting and practicing in the concrete work of breeding, growing, developing, and flowering of an International family for today's earth.
Facebook