Homes have been flooded and several roads and bridges closed after heavy rain caused rivers to overflow in Bulgaria and Romania.

Officials in Bulgaria reported earlier today that the provinces of Plovdiv, Pazardjik, Sofia, Smolyan, Bourgas have all been affected. Officials added that, between 28 and 29 June, emergency services responded to 146 calls for assistance due to flooding and storm damage.

In Plovdiv Province evacuation orders were issued for residents living along the Chaya River in Sadovo Municipality, after river embankments had been breached in two locations. Over 50 houses have been flooded in the province and the road between Plovdiv and Haskovo is closed.

Over 30 homes were flooded in Smolyan province, where a state of emergency was declared in  Chepelare and in the municipality of Smolyan where the Cherna River has overflowed.

Around 26 homes were flooded or damaged by the storm in Pazardzhik province and 24 in Bourgas province. Homes and roads were damaged in Varna, Bourgas province, earlier this month after 71.5 mm of rain fell in 24 hours between 04 and early 05 June.

In Sofia Province, a small number of evacuations were carried out in villages near Etropole, where around 7 houses were damaged.

Flood and heavy rain warnings were issued in Romania, prompting the Ministry of Internal Affairs (MIA) to mobilize emergency teams across the country, including 12,000 police and gendarme officers, 3,200 firefighters and over 6,600 technical staff.

Flooding was reported in north eastern areas, in particular in the counties of Iași and Bacău. MIA reports that between 28 and 29 June around 400 homes have been flooded and around 15 roads and bridges damaged or closed. Local media said that 20 households in Trifesti, Iași County, were evacuated by military firefighters.

The Prime Minister has called for damage assessments to be carried out as soon as the severe weather has passed so the Government can put in place concrete measures to help the population and affected communities. 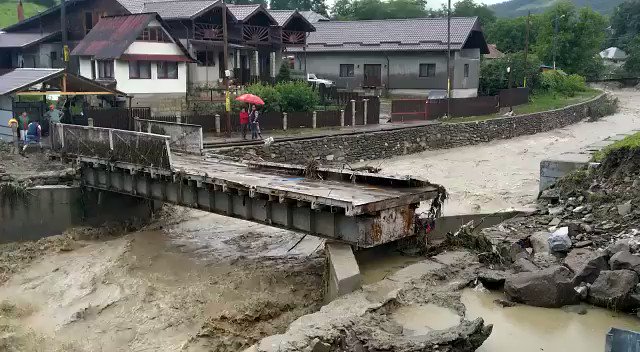