Florida and Texas are the two states expected to suffer the greatest economic damage from climate change, according to a new study from Science magazine.

California comes in third place at an expected impact of $59.6 billion. California has recently suffered a severe drought, as well as devastating wildfires, that caused billions of dollars in damages to homes. New York, still recovering from the damage caused by Hurricane Sandy in 2012, comes in fourth place with estimated losses of $54.7 billion. 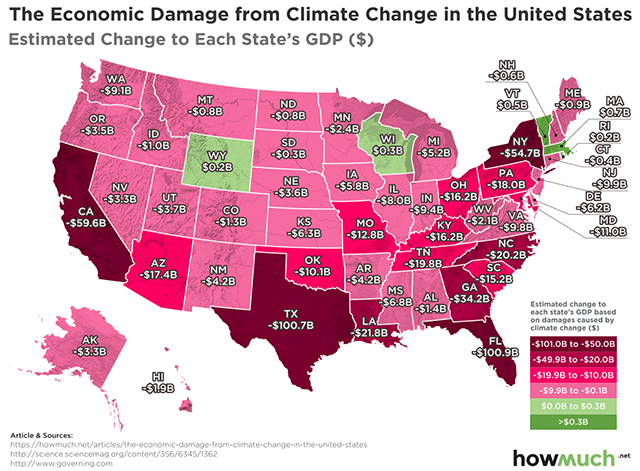 While coastal states are expected to lose the most as sea levels rise and warmer ocean temperatures make hurricanes stronger, states in the middle of the country are also expected to suffer billion-dollar hits to growth as tornadoes become more frequent.

The study comes amid a concerted effort by climate activists to help the U.S. meet the goals of the Paris Accord of limiting temperature change to below 2 degrees Celsius by reducing greenhouse gas emissions. That goal has been put at risk by President Donald Trump’s decision to withdraw the U.S. from the treaty.

On Sunday, former New York Mayor and billionaire Michael Bloomberg said he would donate $4.5 million of his own money to the UN Climate Change Secretariat, which helps other countries implement their Paris Agreement commitments.

Meanwhile, more companies are including disclosures on climate-change risk in their financial reporting and many are adopting sustainability programs and goals. Nonprofit Ceres says they are not still not moving fast enough, however, to affect real change.

On Tuesday, that effort won fresh support when Legal and General Investment Management, one of Europe’s biggest investors with assets under management of almost £1 trillion, said it is preparing to name and shame companies that do not pursue sustainability goals and will stop investing in their shares.

The firm is first planning to “name and fame” companies that have performed well, Helena Morrissey, head of personal investing, told a London conference.

“Climate change risk is a financial risk — in the last six years, coal companies have lost 75pc of their value,” she said.

Valley of Desolation, Wharfedale, Yorkshire Dales: The snow revives innocence, but it’s from this winter’s dramatic destabilisation of the polar vortex and a reminder of climate change Spring is held in a sort of suspense. […]

By Danielle Zoellner  17 February 2018 Two homes were evacuated in Marion County, Florida, on Thursday Six sinkholes formed starting at 8am after residents heard a rumble One sinkhole goes far underneath a home making […]