A storm that hit Brittany, France, during the night from Sunday 03 June to Monday 04 June, 2018, has caused severe flooding in the department of Finistère. The departments of Côtes-d’Armor and Ille-et-Vilaine were also badly affected.

Local fire and emergency crews were called out to over 450 interventions during the storm, with over half of them in the town of Morlaix, Finistère, where some homes have been evacuated.

Photos and videos on Social Media showed flood water raging through the streets of Morlaix. Stéven Tual, meteorologist for Meteo Bretagne, said that around a month’s worth of rain fell in less than an hour. Meteo Bretagne said Morlaix received 52 mm of rain and 70 mm in Monts d’Arrée.

Vigicrues, the flood information service provided by France’s environment ministry, said the storms had generated more rainfall than expected and that watercourses in the area are likely to increase.

Meteo France have forecast more heavy rain for Monday. As of 04 June, 2018, there were 16 departments on Orange Alert for storms in both north west and north east France. 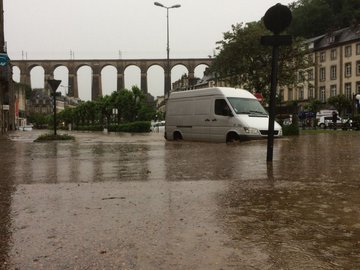 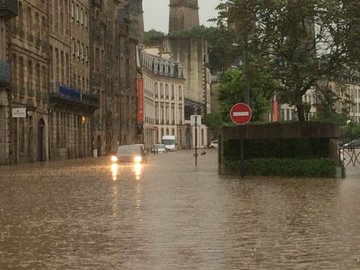 30 MAY, 2018 BY RICHARD DAVIES IN ASIA, NEWS   Record rainfall in the Indian state of Karnataka has caused flooding in the city of Mangaluru as well as areas of Dakshina Kannada and Udupi […]

by Kevin Bissett FREDERICTON – New Brunswick residents have begun the long, messy business of cleaning up sodden homes and cottages — including one runaway cottage left bobbing in lake waters after floating seven kilometres away […]