Cyclone Sagar, a very rare cyclone in the Gulf of Aden, made landfall in north-western Somaliland on 19 May, 2018. At least 16 people have reportedly died as a result of the cyclone.

Earlier the storm had caused flooding and wind damage in Yemen, leaving at least one person dead.

According to a report by the United Nations Office for the Coordination of Humanitarian Affairs (OCHA), heavy rainfall, strong winds and dangerous flash floods hit coastal areas of Puntland and Somaliland and resulted in the loss of lives, crops and livestock as well as the destruction of property and infrastructure. 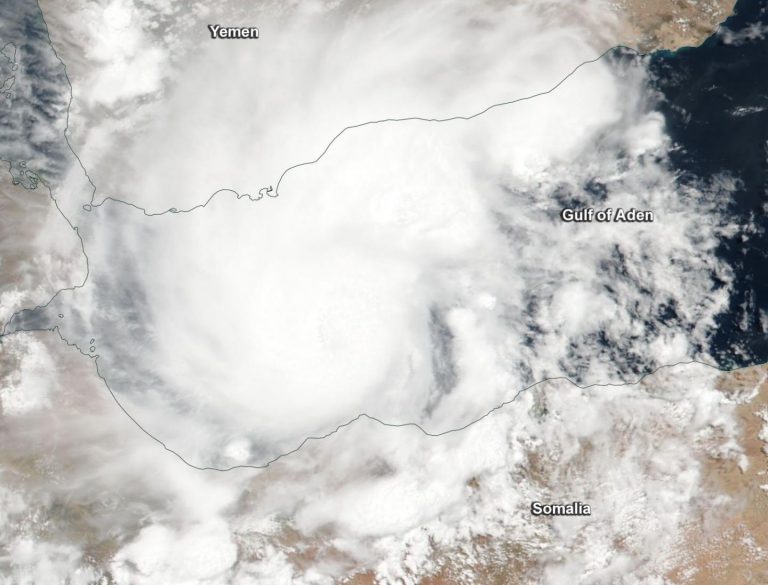 On May 18, 2018, the VIIRS instrument aboard NASA-NOAA’s Suomi NPP satellite captured a true-color image of Tropical Cyclone Sagar in the Gulf of Aden, between Yemen to the north and Somalia to the south. Credit: NOAA/NASA Goddard Rapid Response Team

Sagar formed in the Gulf of Aden between Yemen and northern Somalia on 16 May 2018. By Friday the storm had caused heavy rainfall in coastal areas of Yemen’s Hadramawt and Al Mahra provinces and Socotra Island, according to media reports. Streets were flooded in the port city of Aden.

At least one person died in near Aden as a result of the storm, according to Weather.com.

In Somaliland, at least 16 people died in Galbeed and Awdal, where the cyclone made landfall.

According to the disaster management authority NADFOR, an estimated 1,780 families were displaced, and at least 80 families lost their homes. Infrastructure and livestock were also lost, but the full extent is still to be known once access improves. Flooding and heavy rain has hindered access to some affected areas.

According to local authorities, scores of fishing boats went missing in the region. Reports also suggest that about 40 fishermen were at sea before the cyclone alert was announced and their fate is unknown.

In Puntland, the districts of Bari, Qardho and Iskushuban in Bari region were worst affected.

UNOCHA says that “authorities in Bari region report the loss of livestock and the destruction of property and infrastructure, including buildings and fishing boats. In Qardho, heavy rainfall caused flash flooding in the town’s IDP settlement, destroying at least 30 community latrines and leaving many others damaged. The flooding will likely increase health risks in the region. In Iskushuban, flash flooding has caused devastation of farm land. The tarmac road that connects Bossaso and Garowe, among others, was inundated, leaving major centres, as well as many rural areas in the region and into Sanaag inaccessible.”

Sagar has caused heavy rain and flash floods in Djibouti, in particular in Djibouti City and the suburb of Balbala. As many as 30,000 people have been affected. Many schools have been closed and roads rendered impassable.

Parts of the town of Obock were also flooded and some shelters were damaged by heavy rain in Ali Addeh refugee settlement in Ali Sabieh province.

BY RICHARD DAVIES 20 MARCH, 2018 Record rainfall in northern parts of the Dominican Republic have caused flash flooding in Puerto Plata province. Local media report that over 500 homes and businesses have been damaged. […]