The flood situation continues in Kenya, with more deaths reported after a dam broke its banks killing at least 38 people.

In a statement made soon after the dam break Governor Lee Kinyanjui said, “The water has caused huge destruction of both life and property. The extent of the damage is yet to be ascertained. The County Government of Nakuru, Kenya Red Cross and the local leadership are coordinating rescue operations….We assure residents that we are doing our best to evacuate affected families to safety and assist victims get medical attention.”

Local media reported that at least 300 homes have been affected and Kenya Red Cross Society (KRCS) said 39 people were taken to hospital.

Lee Kinyanjui said that search and rescue operation will continue as there may be more survivors. County officials have set up a centre near the scene for families to report missing members.

“We advise residents to be vigilant as heavy rains have been pounding Nakuru and its environs causing flooding,” he added.

Flooding has affected the country since March this year. Media reports suggest that the death toll has now exceeded 150 people.

In the latest figures from KRCS, more than 50,680 households (an estimated 271,000 people) have been displaced by floods across the country.

Damage assessments and distribution of relief supplies has been hindered as some areas remain inaccessible due to damage to roads or roads rendered impassable by floods, including in Tana River, Mandera, Wajir, Kilifi and Isiolo counties.

In the last few days the overflowing Tana River has caused major transport problems in the south east of the country. Kenya Police say that the river broke its banks Kibusu, blocking an important route between Malindi and Lamu.

The number of people displaced is expected to increase to 280,000 by 14 May, as the Kenya Meteorological Department has warned that more heavy rain is expected. 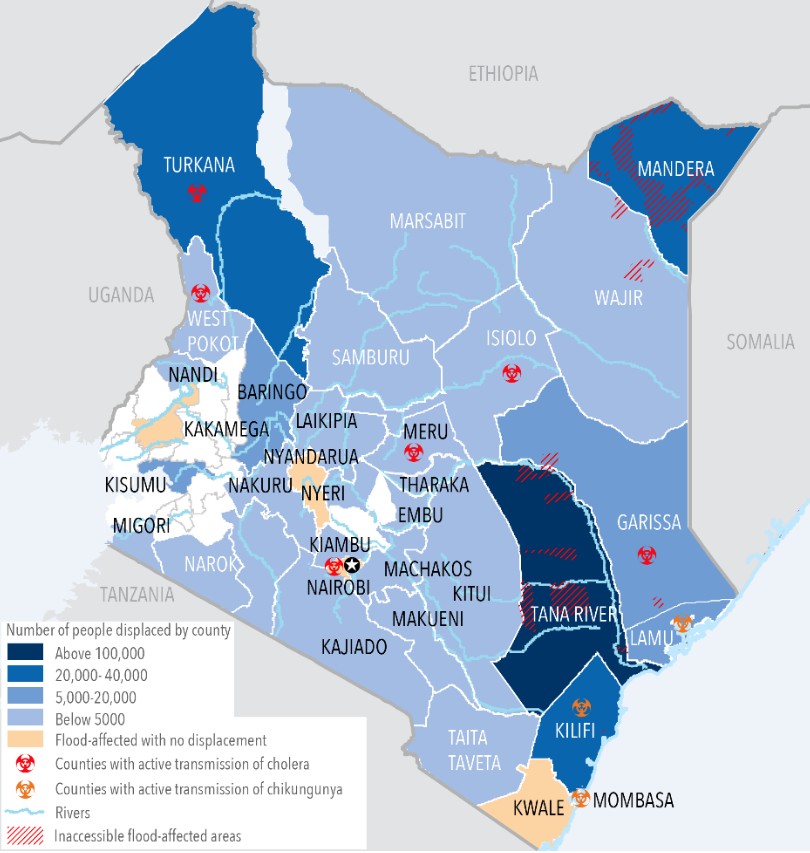