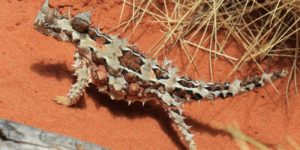 Lizards can shed light on the development of ecological niches and how the changing climate may affect the natural world.

LONDON, 23 November, 2017 – US scientists think lizards could help them one step nearer to an old dream: a kind of “periodic table” for ecology.

Just as the great insight of the Russian chemist Dmitri Mendeleev now means that chemists can understand better the relationships between elements, and make predictions about their responses, a classification of ecological niches could help biologists better understand the impact of climate change on the millions of species that share the Earth.

Such a project may never be completed, but a new study in The American Naturalist demonstrates that it has begun.

An ecological niche is a tangle of environmental conditions and biological behaviours that mean an insect, an amphibian, a reptile, bird or mammal is specialised to make the best of its short life. For example, fig wasps need fig trees to survive, and if there are 900 species of fig tree on the planet, 900 species of fig wasp will evolve to fill those ecological niches.

The researchers worked out what constitutes a niche: they chose habitat, diet, life history, metabolism and defence, and then listed between seven and 15 variables for each of those properties. Then they compiled all the data they could find about 134 species of lizard on four continents from 24 of the planet’s 38 surviving lizard families. And then they started to impose order on their material.

They could do that because, even though Australian desert lizards are of entirely separate species from desert lizards in Africa, or America, they forage for food, stay lively or dormant at given times, reproduce and exploit their habitat in very similar ways. Evolutionary pressures mean that they have converged to fill similar ecological niches.

“Summarising major ecological traits in such simple schemes will allow ecologists to predict how species might react to new environmental conditions and the invasive potential of species,” said Eric Pianka, a zoologist at the University of Texas at Austin, who led the study.

“It will inform us about how niches have evolved in the past and even how they will evolve in the future, all of which has direct bearing on impacts of climate change.”

Climate change presents biologists with a problem: humans depend on the natural world in myriad ways; plant, fungus and animal species recycle the world’s air and water, conserve rainfall, pollinate crops, generate fruits and seeds for nourishment and chemicals for pharmaceuticals, fabrics for clothes and shelter.

They dispose of excrement and other biological waste, and each species in this intricate economy survives because it occupies an ecological niche.

But the ecosystems that support such helpful networks are everywhere at risk because of climate change.  They are at hazard on a global scale and at the level of single nations or marine environments.

But without an intellectual framework that identifies the features that ecosystems, and ecological niches within those ecosystems, might have in common, conservation biologists won’t know where best to start.

What they do know is that conservation is vital, and that the creatures of the world are stronger because they are so many and so varied: yet another study from Switzerland involving 2,200 species in 450 different landscapes has just confirmed once again that the richer the variety of life in it, the more productive the landscape, and the better it is able to withstand change.

Now the scientists from Texas, Oklahoma and Argentina have confirmed, with what they call “the lizard niche hypervolume”, the possibility of a living equivalent of the periodic table that permits predictions that could be confirmed by observation or experiment, not just for lizards but for other families.

Lizards, like birds, inhabit trees, lay eggs and devour insects: unlike birds, they rely on the environment to maintain their temperature, so what would be one day’s food for a small bird might keep a lizard alive for a month.

It follows that birds and lizards occupy separate ecological niches. Ecologists have a potential structure or scaffolding into which to place their specimen animal and its ideal habitat and consider it in relation to other ecological niches.

But, as the researchers point out, so far only 2.2% of known lizards are included in their analysis, and environments are dynamic things: they change with time. There is a lot more to be done in researching clades, groupings of organisms which share a common ancestor and all of its descendants.

Global warming of 1.5°C or 2°C: The lower limit would reduce flood hazards

By Jonathan Amos 9 April , 2018 video:http://www.bbc.com/news/av/embed/p063qt7b/43691671 Liz Thomas on Antarctica’s greater snowfall: “As things get warmer, they get wetter.” Scientists have compiled a record of snowfall in Antarctica going back 200 years. The […]