LONDON — British shoppers began noticing in recent weeks that hummus prices were up significantly. The cause: a drought thousands of miles away.

Insufficient rains in India have resulted in several years of poor harvests of chickpeas, the main ingredient in hummus. The country, by far the world’s largest producer of chickpeas, mostly grows the legume for domestic consumption. But worse-than-expected harvests mean that it has had to buy more chickpeas from growers elsewhere, putting pressure on supplies worldwide and driving up prices.

Those limited supplies of chickpeas have combined with rising demand for hummus in Britain to send prices higher. Average prices for the dish at supermarket are 12 percent higher than a year ago, according to the trade magazine The Grocer and the research consultancy Brand View. That is significantly more than grocery price inflation of 3.6 percent, and overall inflation of 2.7 percent.

It is the latest example of weather leading to poor harvests in one part of the world, and resulting in shortfalls and price rises at supermarkets far away. And it serves as a reminder of the complexity and fragility of the vast global system putting food on the plates of consumers around the world.

■ Last year, a cyclone that devastated Madagascar sent prices for vanilla pods surging. The east African island nation accounts for 80 percent of the world’s vanilla supply, and the storm meant the country’s annual crop was cut by around 15 percent.

That set off a supply crunch, at one point pushing prices for vanilla pods, which were about $30 a kilogram, or $13.60 a pound, in 2012, to more than $700 a kilogram in 2017. Those prices, coupled with poor crops, were too high for some retailers. Oddono’s, an ice cream chain in London, stopped selling vanilla ice cream for several months.

■ A drought in California drove almond prices sharply higher in 2014 and 2015. That came just as demand for a broad range of nuts was surging, pushed in particular by increased consumption in China. 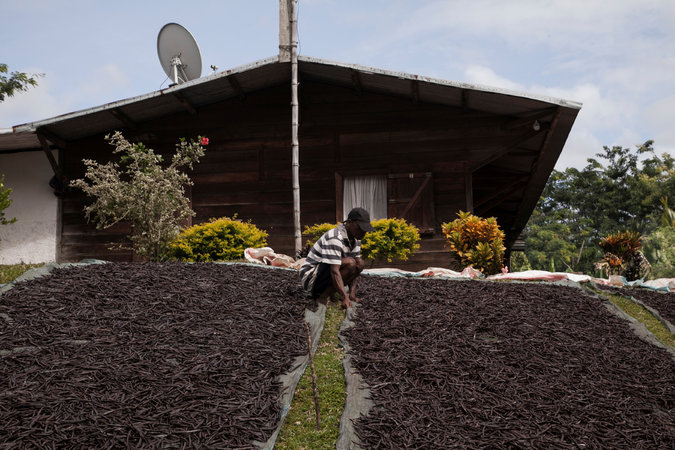 Red vanilla is set out to dry in Madagascar. CreditRijasolo/Agence France-Presse — Getty Images

■ In 2015, the combination of rising demand for chocolate in Asian countries, unusual weather in major cocoa-producing countries of West Africa and attacks of fungus resulted in higher prices for chocolate. The factors just happened to coincide with Valentine’s Day.

Britain is particularly vulnerable to shifts in the international food system: It imports almost a third of its food, and a weaker currency, driven in part by uncertainty over the country’s exit from the European Union next year, could make groceries even more expensive.

The unexpectedly severe drought in India of the past few years has affected hundreds of millions of people in the country. It has also had consequences for global markets, including for chickpeas, as India typically produces 10 times the amount of the legume as the next-biggest producer, according to data from the United Nations Food and Agriculture Organization.

In Britain, hummus has quickly gone from being a niche snack, introduced to supermarkets in the 1990s, to being a staple. The dish, a specialty of the Middle East and the Mediterranean, was voted one of the products most likely to be found in Britons’ fridges in a 2013 survey of European food habits. Annual sales of hummus in the country total more than 100 million pounds, or about $140 million, up about 50 percent from four years ago, according to the research firm Kantar Worldpanel.

Indeed, worldwide demand for hummus has driven up interest in chickpea production, and analysts expect a shift toward healthier eating will continue to bolster the dish’s popularity. Farmers in the United States, for example, were forecast to drastically raise their chickpea harvests last year, according to official data, after what was already a record year in 2016. And scientists from Scotland and Ethiopia are jointly exploring the development of drought-resistant chickpeas.

For now, some manufacturers in Britain are trying to absorb the higher costs.

Ramona Hazan’s London-based business, Ramona’s Kitchen, makes about 75 tons of hummus a month, both for supermarkets and for sale directly to customers. Each 250-gram tub costs about £1.60, but tighter margins resulting from higher chickpea prices mean she is now looking at diversifying.

“We might look at pea and mint dips, extend our range to things not as chickpea-based,” Ms. Hazan said.

Others have taken to searching for options elsewhere. AGT Poortman, which supplies chickpeas to companies that make hummus for British supermarkets, said its prices had increased around 40 percent from 2015 to 2017. To supply clients, it has asked them to allow it to buy chickpeas from a wider variety of places.

Liverpool plains farmer Megan Kuhn says cows are being slaughtered because there is no way of feeding them after years of extreme weather Lisa Cox Sat 9 Jun 2018 23.00 BST In the south-west corner of […]

Recent Australian droughts may be the worst in 800 years

May 2, 2018 by Mandy Freund, Ben Henley, Kathryn Allen And Patrick Baker, The Conversation Australia is a continent defined by extremes, and recent decades have seen some extraordinary climate events. But droughts, floods, heatwaves, […]

Global Warming Is Messing with the Jet Stream. That Means More Extreme Weather.