A storm that swept across several parts of Sri Lanka between 20 and 21 May, 2018, caused flash floods in several areas, with Southern, Western and Sabaragamuwa Provinces the worst affected. Parts of North Western Province also recorded heavy rainfall.

According to the country’s Disaster Management Centre (DMC), 1 person died and 1 was injured in a landslide in Bulathkohupitiya, Kegalle in Sabaragamuwa Province on 20 May. The government said that in total at least 5 people have lost their lives as a result of landslides, wind damage and lightning strikes. DMC said that 13,314 people (3,438 families) in 12 districts were severely affected.

Sri Lanka’s Department of Meteorology said that Anamaduwa, Puttalam, North Western Province recorded 353.8 mm of rain in 24 hours to early 21 May, 2018. At least 5 locations recorded more than 100 mm of rain in 5 hours during 20 May, including Ratnapura (Sabaragamuwa Province) which reported 222.5 mm and Eheliyagoda (Sabaragamuwa Province) with 201.5 mm.

The department has warned of further heavy rain, with daily amounts of about 150 mm expected in some places in Sabaragamuwa, Western, Uva, Central Provinces and Galle and Matara districts in Southern Province.

The National Building Research Organisation (NBRO) has issued a landslide warning for seven districts for the next 24 hours, including Kalutara, Kegalle, Ratnapura, Badulla, Nuwara Eliya, Galle and Kurunegala.

Sri Lanka’s Irrigation Department says that river levels are high across the country, with flood alerts or warnings in at least 16 locations. The Gin Ganga at Tawalama, the Kelani Ganga at Norwood and the Nilwala Ganga at Panadugam are all on Major Flood Alert. 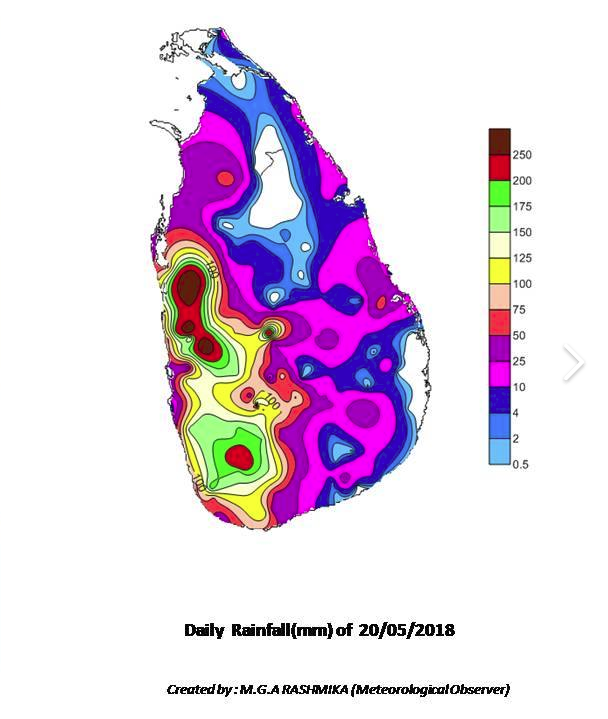 Rainfall map for Sri Lanka, 20 May, 2018. Image: Department of Meteorology

12 JUNE, 2018 BY RICHARD DAVIES Severe weather, including thunderstorms, heavy rain and strong winds has affected Rohingya refugee camps in Bangladesh. Media are reporting that over the last 2 days as many as 12 […]

Why is it raining so much in Qatar this season?

by Rob McElwee 13 Nov 2018 After a dry “rainy season” last year, Qatar this year has seen abnormally early thunderstorms and rains starting last month. In less than three weeks, there has been 136mm […]