Scientists are alarmed by a rise in mass mortality events – when species die in their thousands. Is it all down to climate change?

There was almost something biblical about the scene of devastation that lay before Richard Kock as he stood in the wilderness of the Kazakhstansteppe. Dotted across the grassy plain, as far as the eye could see, were the corpses of thousands upon thousands of saiga antelopes. All appeared to have fallen where they were feeding.

Some were mothers that had travelled to this remote wilderness for the annual calving season, while others were their offspring, just a few days old. Each had died in just a few hours from blood poisoning. In the 30C heat of a May day, the air around each of the rotting hulks was thick with flies.

The same grisly story has been replayed throughout Kazakhstan. In this springtime massacre, an estimated 200,000 critically endangered saiga – around 60% of the world’s population – died. “All the carcasses in this one of many killing zones were spread evenly over 20 sq km,” says Kock, professor of wildlife health and emerging diseases at the Royal Veterinary College in London. “The pattern was strange. They were either grazing normally with their newborn calves or dying where they stood, as if a switch had been turned on. I’ve never seen anything like that.”

The saiga – whose migrations form one of the great wildlife spectacles – were victims of a mass mortality event (MME), a single, catastrophic incident that wipes out vast numbers of a species in a short period of time. MMEs are among the most extreme events of nature. They affect starfish, bats, coral reefs and sardines. They can push species to the brink of extinction, or throw a spanner into the complex web of life in an ecosystem. And according to some scientists, MMEs are on the rise and likely to become more common because of climate change.

The MME that has pushed the saiga closer to extinction struck in 2015. Kock was part of an international team studying the animals as they gathered for the calving season. For most of the year, saiga are on the move, able to avoid predatory wolves and human poachers by sprinting at more than 40mph, making them one of the fastest ungulates, or hoofed animals. But once a year they put their migration on pause to calve in vast groups when the grass is at its lushest, before it is scorched by the sun.

In 2015, the main gathering in the Betpak-Dala region of central Kazakhstan, an area roughly the size of the British Isles, numbered 250,000. Nearby, other groups were thousands strong. Saiga are remarkable animals. Their bulbous noses, which hang over their mouths, give these antelopes an almost comical appearance. The nose is flexible and can be inflated, helping them to breathe warm air in the freezing winters and filter air in the arid summers as they sprint with their heads down in a cloud of dust. The species has been hit by mass die-offs before. In 1981, around 70,000 died suddenly in a few days, while in 1988 another 200,000 died. The creatures are also victims of poachers.

“In 2014, we believed there were about 250,000 adults and they produced a good number of calves – perhaps a couple of hundred thousand. It looked a viable population and we’d expected a population of a million soon. There was even talk of them coming off the critically endangered list,” Kock says.

But as the scientists watched a year later, the mothers fell sick and began to drop dead. “It wasn’t as if the disease started at one end and spread – there was no time for transmission of the pathogen from animal to animal. It was too quick,” he says. “Within two or three days, everything was dying. By the end of the week, every single one was dead.”

The scientists on the ground pinpointed blood poisoning as the cause, but were puzzled as to why whole herds were dying so quickly. After 32 postmortems, they concluded the culprit was the bacteriumPasteurella multocida, which they believe normally lives harmlessly in the tonsils of some, if not all, of the antelopes. In a research paper published in January in Science Advances, Kock and colleagues contrasted the 2015 MME with the two from the 1980s. They concluded that a rise in temperature to 37C and an increase in humidity above 80% in the previous few days had stimulated the bacteria to pass into the bloodstream where it caused haemorrhagic septicaemia, or blood poisoning.

The weather link raises the spectre of climate change. Just as it is rarely wise to link a single extreme weather event – whether it’s the Australian heatwave, last summer’s Hurricane Harvey or this winter’s North American cold snap – to climate change, it is equally difficult to blame an MME on global warming. But what can be said with confidence is that the sorts of extreme weather events linked to MMEs – such as the temperature and humidity rise that nearly wiped out the saiga – will become more frequent.

Australians know all about extreme weather. While much of Europe and North America has endured a bitter start to the year, the Australian summer has been a scorcher. In January, temperatures in Sydney topped 47C, the city’s highest since 1939. The toll on wildlife has been devastating. As the mercury rose, corpses of critically endangered flying foxes – or fruit bats – began to pile up under the trees in New South Wales. Horrified wildlife campaigners at one colony in Campbelltown, south of Sydney, discovered 400 dead bats. Some were still hanging from trees. Many were babies, abandoned by their parents in their own desperate search for shade.

Flying foxes are well adapted to normal Australian summers. But above 40C, they are unable to regulate their body temperature and can die from overheating. This year’s deaths were grim enough, but they were dwarfed by the MME of 2014, when at least 45,000 flying foxes were killed on one hot day in south-east Queensland. Some colonies had more dead bodies than living bats. Their corpses were piled thick on the ground as the three species there – the black, little red and grey-headed – were hit.

Events like the disaster that struck the flying foxes and saiga appear to be growing in number. The most thorough study of its kind published in the Proceedings of the National Academy of Sciences in 2015 uncovered 727 accounts of MMEs involving 2,407 animal populations since 1940. It found that not only are reports of MMEs on the increase – by about one event a year – but the number of animals killed in each event is on the rise for birds, fish and marine invertebrates. 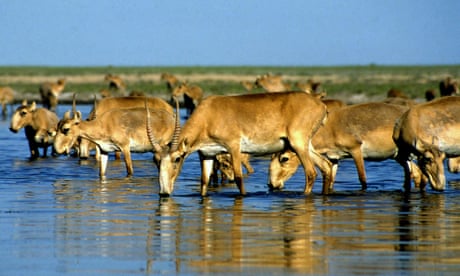 Mass deaths of saiga antelope in Kazakhstan caused by bacteria

Adam Siepielski, an evolutionary ecologist at the University of Arkansas and a co-author of the paper, became fascinated by the phenomena after hearing a radio report of millions of sardines and anchovies dying. “These reports of MMEs are probably underestimates in terms of occurrence and sheer magnitude,” he says. “There is additionally a challenge in trying to understand whether this increased occurrence is a real event, or whether there are more people observing these things and [they are] more likely to report them. We call this the epidemic of awareness.”

The study found that disease was the biggest factor in MMEs, playing a role in a quarter of them. Around 19% were directly linked to human behaviour such as pollution. Factors linked directly to climate – including extremes of hot and cold, oxygen stress and starvation – collectively contributed to about a quarter.

Untangling the causes – and working out the role of climate change in MMEs is difficult. “In many cases, there are multiple stressors – such as, in the case of the saiga, a low-lying bacterial infection, slightly higher humidity and higher temperatures,” says Siepielski.

“There are some mass mortality events linked directly to extreme heatwaves or cold snaps. In other cases there could be indirect changes, where shifts in temperature cause diseases to be more common and which lead to an MME.”

That kind of temperature-related outbreak is now thought to lie behind one of the biggest die-offs ever observed in the natural world, in which hundreds of millions of starfish off the west coast of America began to “melt” into white gloop. More than 20 species of starfish along the coast from Mexico to Alaska were hit by the sea star wasting disease, a condition caused by a parvovirus – the group of viruses that cause gastrointestinal problems in animals. The virus left the starfish vulnerable to bacterial infection. Within one or two weeks of infection, white cuts appeared on their bodies and the creatures became listless. Some ripped off their infected arms and tried to walk away. But for most the disease was deadly. Like the bacteria that triggered the MME in saiga, the virus appears to have been present in starfish for decades – if not longer. Samples stored in museums since the 1940s tested positive.

An MME can push a species closer to extinction. But it can also have knock-on effects elsewhere in the fragile food web. In tidal pools on the west coast, where once there was a healthy mix of species, mussels – food for starfish – are starting to dominate. Off California, another source of starfish food, sea urchins, are also on the rise – causing a fall in the availability of kelp, the sea urchins’ main food source. That decline could hit species that depend on it for shelter, food and protection.

A paper published last year in the Philosophical Transactions of the Royal Societyconcluded that the die-off was probably linked to warmer seas. The team, led by Morgan Eisenlord at Cornell University, looked at the links between ocean temperatures and disease in the most common species on the west coast, the ochre sea star, as well as testing the effects of warmer water in the lab. Warmer than usual water didn’t just put the starfish under stress, it also made infectious agents more prevalent, they concluded.

Kock is confident that climate change will lead to more MMEs – pushing vulnerable species closer to extinction and altering the food web. He believes that conservationists should be on the lookout for other mortality events in species such as reindeer and elk. “The tragedy is, we will probably see more events like the event that affected the saiga,” he says. “Evolution takes millions of years and if we have a shift in environmental conditions, everything that’s evolved in that particular environment is under different pressures. Microbes adapt and can respond to changes quickly, but mammals take hundreds of thousands of years or millions of years to adapt. That’s the real worry.”

BY BOB BERWYN, INSIDECLIMATE NEWS MAY 16, 2018 Global warming will drive many of North America’s fish species hundreds of miles northward, potentially costing coastal fishing communities billions of dollars over the next few decades, […]

Low-lying atolls around the world will be overtaken by sea-level rises within a few decades, according to a new study Hundreds of thousands of people will be forced from their homes on low-lying islands in […]

By Georgina Rannard & Esme Stallard BBC Climate & Science Children should be taught climate change in more depth and in all subjects, experts and students themselves have told BBC News. Current teaching is leaving […]