The Xikrin, who have lived alongside the Cateté river in the Amazon rainforest in northern Brazil for centuries, have a mantra: “The river is our life.” Surrounded by an abundance of plant species, they swim and bathe here.

To fish, the tribe use timbó, a toxic vine that reduces the concentration of oxygen in the water, forcing the fish to come to the surface, where they are shot with arrows. “If we use hooks to fish, only one of our families will eat fish,” explains former tribal chief Onkray Xikrin. “But with timbó the whole village can eat.”

But the River Cateté is dying, and with it the way of life of the Xikrin. In 2010 Mineração Onça Puma, a company owned by the mining company Vale, began extracting nickel in the nearby hills, which have tributaries flowing into the Cateté. Vale is one of the world’s largest producers of nickel.

Around this time, the Xikrin who were diving into the river say they began suffering itchy skin and burning eyes. The tribe also noticed a decline in the quantity and diversity of fish. In 2015, tests by a professor at the Federal University of Pará found traces of nickel in the sediment of the river at almost double the safe level downstream from the mines, but no trace upstream. The tests also found unsafe levels of iron, chromium and copper.

Now federal prosecutors are battling to have the operations of Mineração Onça Puma – which processes the ore at a plant less than four miles from the territory of the Xikrin – shut down. They are also seeking 50 million Brazilian reais (£10.4m) in compensation for each of the seven affected villages.

The Xikrin fought for 14 years for the demarcation of their territory, a Brazilian constitutional right that protects their land from exploitation. By the time the demarcation was ratified in 1991, loggers had felled much of the mahogany in the region. Miners were also active, with high-quality iron to be found to the east, the largest copper reserves in Brazil to the north, and exceptional nickel to the west. Nearby, in 1985, Vale established what is now S11D, the largest iron ore mine in the world.

Much of this took place on land that had been originally claimed by the Xikrin. But when the demarcation was ratified, 13,000 of those hectares (321,23 acres) were not included. The nickel mines in the Onça mountain range are permitted as they are not officially in the indigenous territory. But the area is home to the Xikrin cemetery, a place where the dead meet to sing and dance for eternity, according to their culture.

Anthropologist Lux Vidal, emeritus professor at the University of São Paulo and a pioneer in Xikrin studies, says it was known at that time that nickel might be extracted there. “Geologists, especially Canadian geologists I met, told me: ‘This area to the west is an area designed for nickel. Nickel is the worst of things that can happen. It is the most polluting ore, the most lethal ore there can be.’” 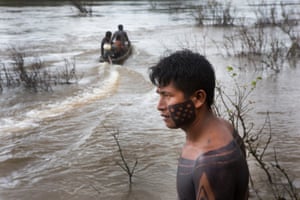 The Xikrin people rely on the river as a source of the fish that makes up a substantial part of their diet. Photograph: Taylor Weidman/ LightRocket/Getty Images

In those mountains, two streams begin that flow into the River Cateté. When it rains heavily during the Amazonian winter – between October and April – the water brings sediment and mud from the hillside, turning its waters an earthy red. One stream flows into the Cateté just 500m from the indigenous territory.

When the Xikrin began to suffer headaches, skin irritations and food poisoning in 2013, it was a doctor from the university of São Paulo who told them to avoid the river.

Dr João Paulo Botelho Vieira Filho first met the tribe when he went to vaccinate them to prevent their possible extinction: at that time, only 93 tribe members remained after the population had been decimated by epidemics contracted from outsiders.

The doctor believed the heavy metals had caused many health problems for the Xikrin, including an unprecedented wave of births defects. “The river is dead. If nothing is done, we are on the verge of a chemical ethnocide,” he says. But many of the Xikrin continue to bathe in the river – abandoning it would mean severing ties with their history and culture.

Now the fate of the mines is in the hands of Brazil’s notoriously bureaucratic court system. Federal courts have ordered the mine to cease activities on three occasions, but the enterprise continues to function after Vale obtained injunctions. The last time it was shut was in 2017, with Vale – for now – allowed to continue operating only the beneficiation part of the extraction process, which improves the economic value of the ore.

In a statement, the company said: “Vale complies with the law. The company does not use any of the elements identified by [prosecutors] as causing pollution in the Cateté river. All of the reports presented prove this and Vale will show this in court.”

Vale does not dispute that pollution exists but says it might be from farming pesticides or illegal miners nearby. In a report for investors to Brazil’s Securities and Exchange Commission, the firm admitted that losing the case could mean facing “a considerable financial impact” and “the cessation of operations at the Onça Puma mine”.

Published on 29/05/2018, 5:31pm Sponsored content: The global steel corporation, ArcelorMittal, is accused of not taking environmental responsibility at its plant in Zenica, posing a risk to public health By Nordea Sasja Beslik, Head of […]

Fly-Fishing on Montana’s Big Hole River, Signs of Climate Change Are All Around

Climate Change Threatens Thousands of Species in Our Lifetime

BY SABRINA SHANKMAN MAR 13, 2018 An alarming study finds at 4.5 degrees warming, the world’s most biologically diverse ecosystems could see local extinction of half their plant and animal species. Without action to stave […]