Britain is set for the coldest February week in five years as freezing air arrives from Russia.

On Saturday temperatures fell as low as -5.5C in Anglesey, north Wales and the cold spell is expected to intensify from Sunday night into Monday.

The Met Office has issued an amber cold weather alert, which warns of increased health risks to vulnerable and elderly people.

It has also issued two yellow weather warnings for snow.

Snow showers are expected in large parts of the UK on Monday and Tuesday, which could cause travel delays and cancellations, power cuts and problems with mobile phone services.

BBC weather forecaster Gemma Plumb said snow showers will arrive in the east of the UK on Sunday night before pushing through to western areas by Tuesday. Showers could continue later into the week. 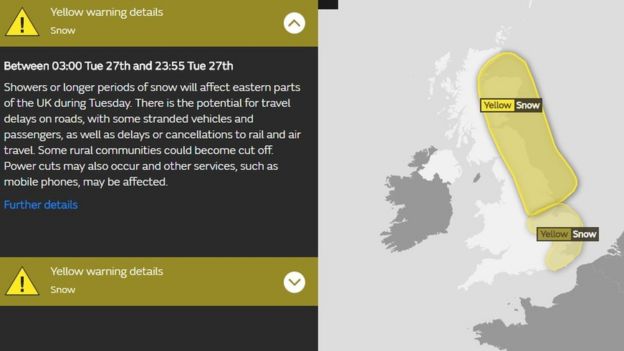 Two weather warnings have been issued for Monday and Tuesday

The heavier showers are expected on Monday night and Tuesday, she added.

Although there is a chance some areas could see between five and ten centimetres of snow, other areas may experience much lighter flurries.

The Met Office also issued a separate amber cold weather alert – the second most serious – warning that icy conditions and snow could disrupt the delivery of services and increase health risks to vulnerable patients.

The alert, issued for 09:00 on Friday until 08:00 on 1 March, warns the cold can be dangerous especially for the very young, very old or those with chronic diseases.

The Met Office said temperatures are set to be 1C in most urban areas on Monday – although other parts will not reach 0C. The cold weather could last for one or even two weeks.

Minimum temperatures next week are forecast for between -5C to -8C but it is expected to feel much colder.

Met Office meteorologist Martin Bowles said: “The feels-like temperature will be 5C lower than what we see on the thermometer because of a strong easterly wind chill.”

The meteorological start of spring is Thursday, 1 March, when average temperatures are usually 10C in the south east and 9C in Manchester.

But this year 1 March will fall right in the middle of the cold spell, which is being caused by an area of high pressure moving north into Scandinavia drawing cold air in from the east.

Mr Bowles said: “It’s expected to stay cold all of next week. Spring will come eventually but it will be postponed. 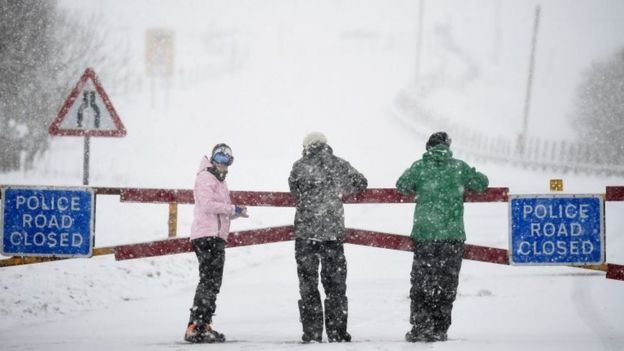 Some parts of Scotland have already seen heavy snow this month

“We haven’t had temperatures that low in late February since 2013. It’s not unheard of. There are records that are lower than that.

“But it is quite unusual, particularly as it’s quite late in the season.”

DAILY NEWS 13 June 2018 By Andy Coghlan They may be the UK’s favourite mammals, but hedgehog numbers in Britain have fallen by 66 per cent in just two decades. The UK Mammal Society and […]