Hawaii Governor David Ige issued an emergency proclamation on 15 April for the County of Kauaʻi after unprecedented rains caused major flooding and a series of landslides.

The National Weather Service recorded over 27 inches (685 mm) of rainfall in Hanalei on the island of Kauai during a 24-hour period from 14 to 15 April.

“We’ve mobilized to assist Mayor Carvalho and his emergency management team. The Hawaiʻi Guard and the City and County of Honolulu are preparing to help Kauaʻi with search and rescue operations as crews continue to clear the roadway,” said Governor Ige.

The proclamation authorizes the expenditure of state monies as appropriated for the speedy and efficient relief of damages caused by this weather event.

Officials added that both on-duty and off-duty emergency personnel have performed a number of rescues and evacuations since Saturday night. The exact number of rescues are not yet known and no major injuries have been reported at this time.

The Coast Guard responded to the vicinity of Hanalei Bay, April 15, 2018 to assist local authorities after the area sustained flooding and landslides due to heavy thunderstorms over the weekend.

Roads have been washed out and schools have been closed. Both water and power supply interrupted.

Dozens of homes have sustained damage in Hanalei, Wainiha, Haena and Anahola. Evacuation were shelters were opened to house those displaced from their homes.

At least two homes were dragged from their foundations in in fast-moving floodwaters on the northern side of the island on Saturday 14 April. No injuries have been reported.

The National Weather Service recorded 27.52 inches (699 mm) of rainfall in a 24-hour period from 14 to 15 April in Hanalei. NWS Hawaii said “This beats all 1-and 2-day rainfall records in Hanalei.”

By the afternoon of Sunday 15 April, Kalihiwai Reservoir had reached near capacity.

The Hanalei river near Hanalei stood at 14.76 feet as of 16 April, well above minor flood stage of 7.7 feet. 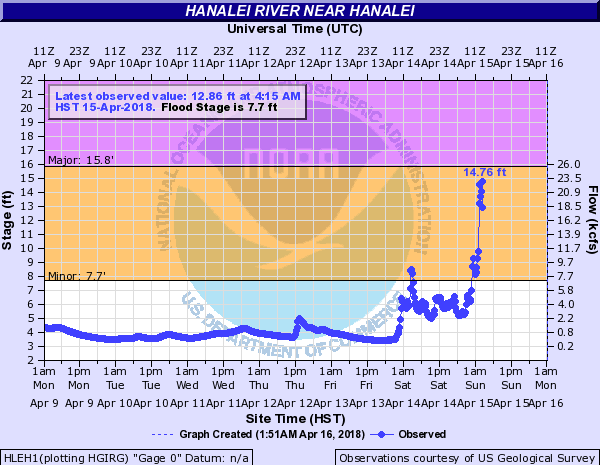