By Chloe Morgan For Mailonline

A woman who left the UK for Portugal has told of the ‘life-changing’ moment she found love in a ‘muddy’ ditch with a family friend.

Luana Ribeira, 38, who is now living in Anglesey, found herself in the midst of personal and romantic turmoil, and decided to leave her three-bedroom detached home in Leeds for Portugal to try to combat the new circumstances she was suddenly faced with.

When she arrived, she fashioned an eco-home out of a poly-tunnel and lived for a few months without electricity or running water, and during this time she was able to find the clarity and motivation she needed to really kickstart her life again.

In that ditch is where she found love with a family friend, Al Meyer, 35, from Leeds, and she says she hasn’t looked back since.

‘It made me so much more appreciative of the small things,’ said Luana. ‘Running water, power, internet, being able to keep the mosquitoes out and to straighten my hair. It transformed who I was as a person. I even changed my full name to reflect that.’ 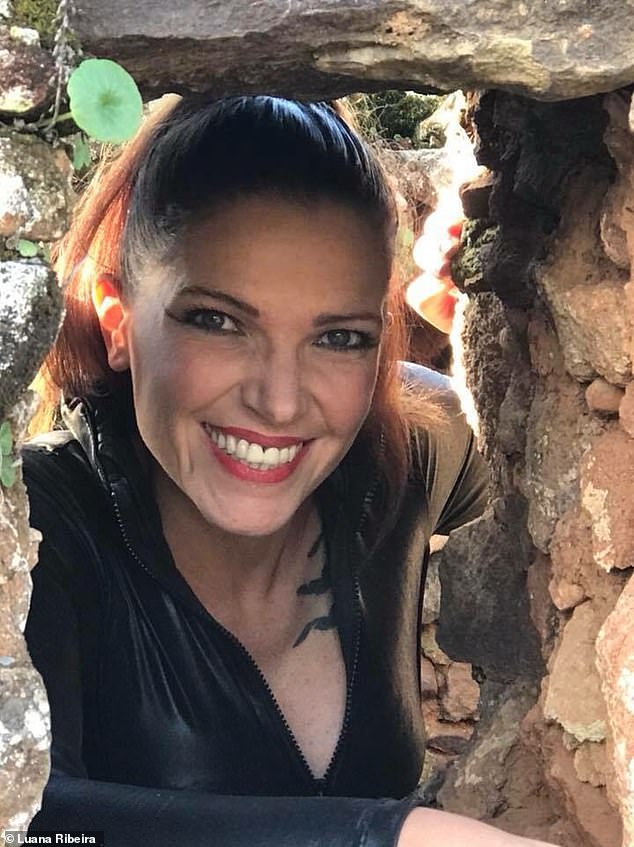 Luana Ribeira (pictured), 38, from Anglesey, left her three-bedroom detached home in Leeds to move over 1,400 miles away with very few belongings to live in a muddy ditch in Portugal 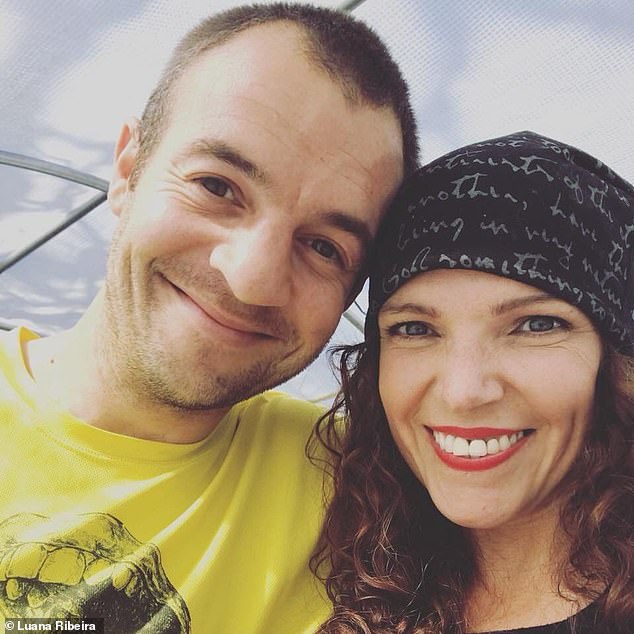 In 2018, Luana got on a plane to Portugal with her children Electra, now eight, and Seren, nine, before meeting old family friend, Al Meyer, 35, from Leeds (pictured together) 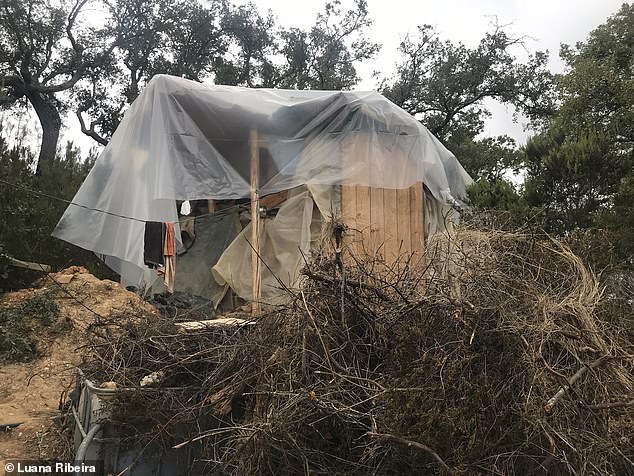 Al was building his own eco home, and Luana had hoped to open an animal sanctuary, so the duo teamed up and she moved onto his land where he was living in a muddy ditch (pictured)

The businesswoman said that while she was living in a nice suburb of Leeds, running the business of her dreams with a great income, she felt lost and empty. Pictured, in Portugal

Luana says her life had erupted into chaos before she decided to make the unusual decision to move – and live in a ditch full of mud.

‘After being happily married for eight years, I was going through a marriage break up,’ she explained. ‘I was confused, my self-worth and confidence had plummeted and I felt like I didn’t even know who I was any more.’

‘I was living in a nice suburb of Leeds, running the business of my dreams and had a great income, but I felt lost and empty.’

Then one day, Luana says her head was spinning and it all got too much for her.

‘I felt like I needed to escape,’ said Luana. ‘A family friend, Al Meyer, had moved out to Portugal where he had bought some land and it made sense to me that Portugal would be the place that I could go for some space.’

‘As soon as I arrived, I knew I didn’t want to leave. I had booked myself into a nice holiday apartment and Al came to visit and ended up staying there with me. 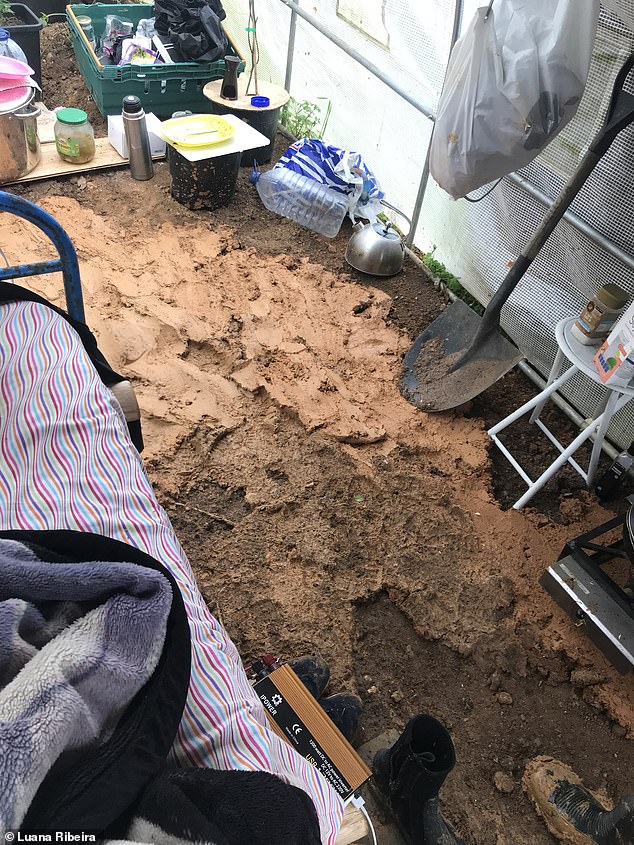 Luana revealed the couple left a warm, cosy house to live in a muddy ditch which had a bed and a camping stove (pictured) 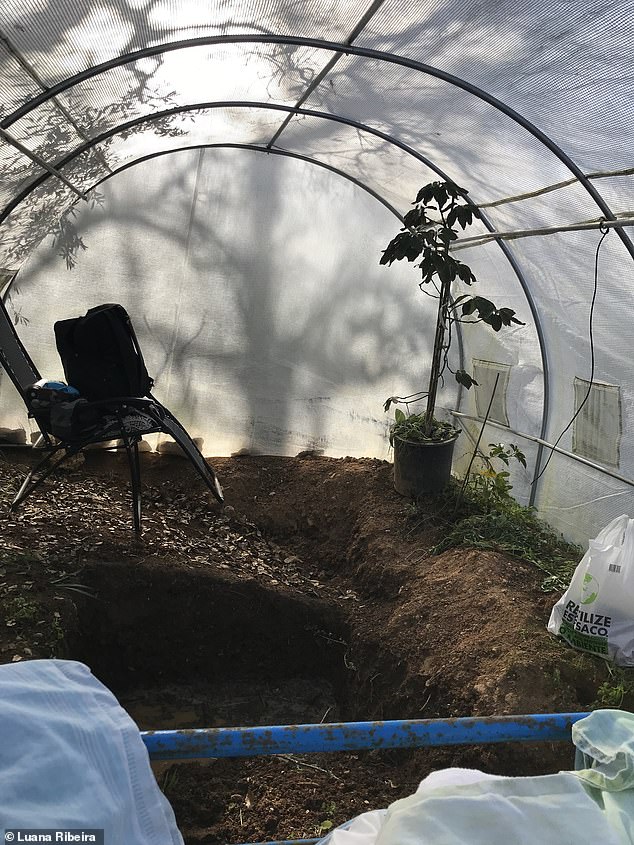 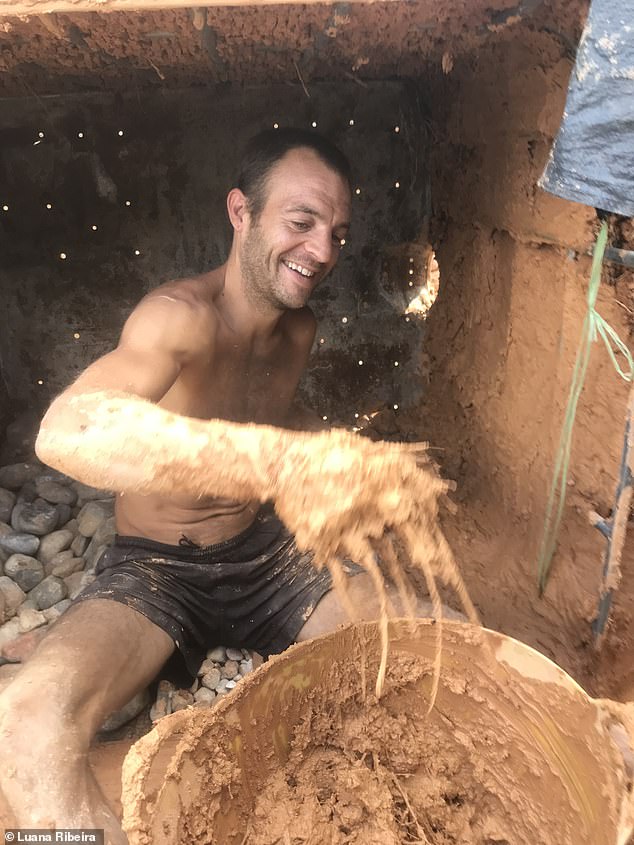 When Luana went to Portugal, Al (pictured) had been living in a rural part, hours away from civilisation for a year

‘I’ll never forget sitting downstairs and Al coming downstairs after having his first hot shower for a year! He was in absolute ecstasy and full of gratitude.

‘You see, he had been living in rural Portugal, hours away from civilisation for the past year.’

Luana was in awe as he told her about his experience and says the thought of living wild was so appealing to her.

‘Al’s drive, spark and enthusiasm instantly lit a fire in me,’ she said. ‘I’d known him a long time, but had never known this side of him.’

‘He told me about his plans to create a fully sustainable environment for people to live and I told him about my long-term goal of building an animal sanctuary.’

‘It became apparent that Al was doing amazing work on the land but didn’t have the funding for what he had in mind. It meant that progress was slow, as he was doing everything by hand and working alone.’

As the pair were chatting over a glass of wine one night, it dawned on them both that they could collaborate and bring both of their dreams into reality.

‘It was perfect,’ explained Luana. ‘Al had the knowledge and the sustainable community he had planned would only be improved by introducing the animals I wanted to rescue.’ 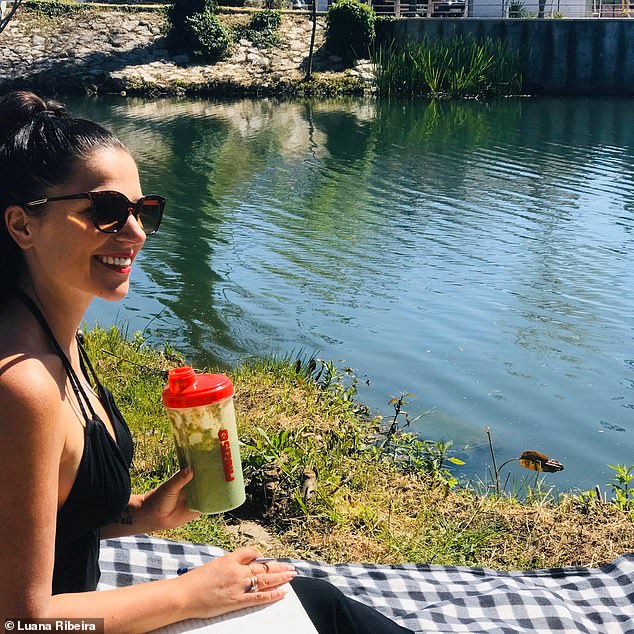 Luana was in awe as he told her about his experience and says the thought of living wild was so appealing to her. Pictured, by the river in Portugal 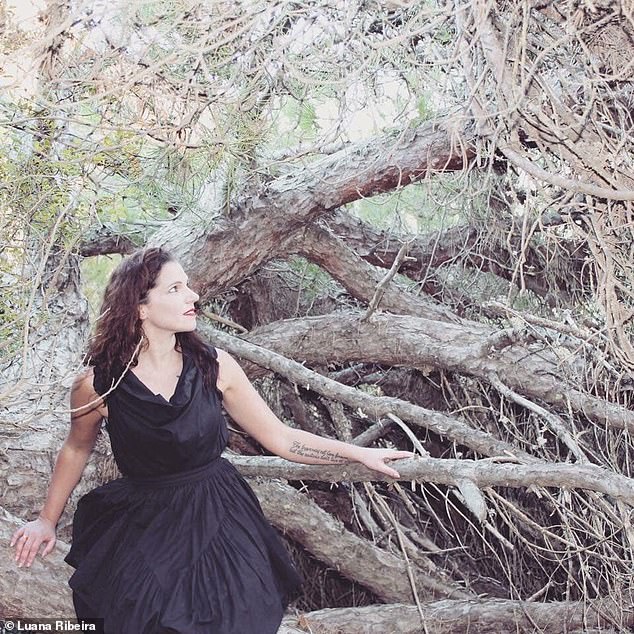 Luana said that if she wasn’t working during the three months, she could be found amongst the trees (pictured) 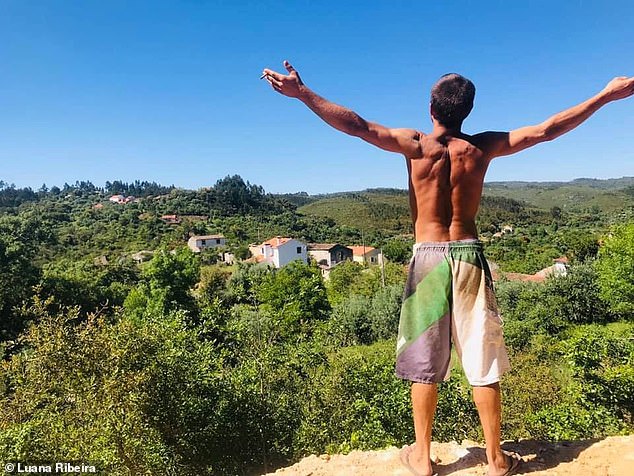 ‘My business was more than capable of funding the project and I was confident that it was established enough, had a strong enough team and systems that were efficient enough for it to be able to run without me.’

Without much thought or planning, Luana rented a house as close to Al’s land as she could and left everything she knew behind in the UK.

‘We lived in the house for a while,’ she said. ‘By now, our relationship had deepened and we didn’t want to be apart. We had a nice, easy life but were getting frustrated as we were making no progress with our plan.

‘The relaxed vibe and sunshine were lovely, but we were here on a mission. I visited Fiji on a business retreat and it was there, as I looked around me, seeing the happiest people I had ever met, who lived in wooden huts and had no possessions, that it hit me.

‘We needed to go all in with the project. We needed to move onto the land. “But there’s only a tiny tent!” Al said. ‘The tent isn’t big enough for two. What if we put the poly tunnel over the ditch for shelter?’

‘That was it. Decision made! We left our warm, cosy house and went to live in the ditch. It was very muddy, but it had a bed and a camping stove.’ 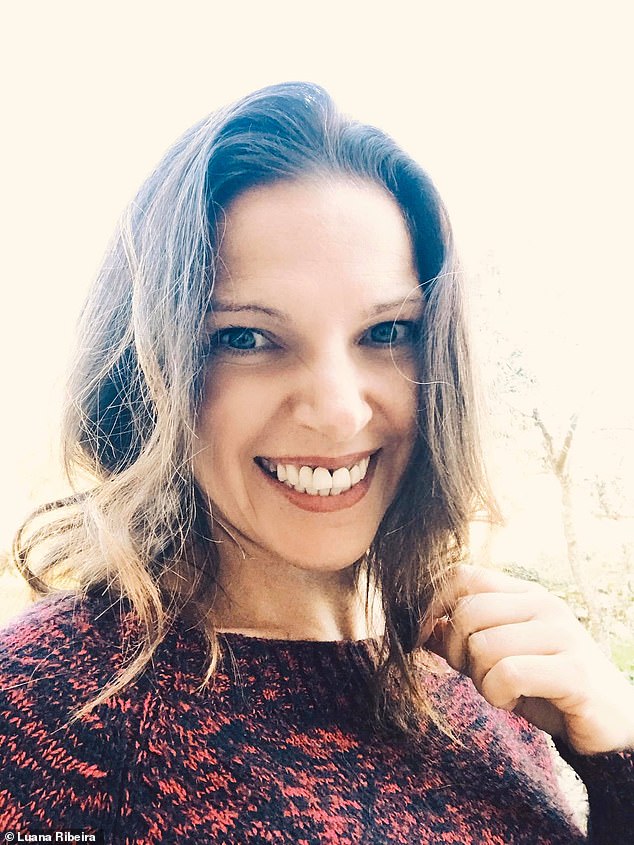 Luana (pictured) said that sometimes, living in a ditch was ‘complete peace and tranquility’ and that they rarely looked at the time 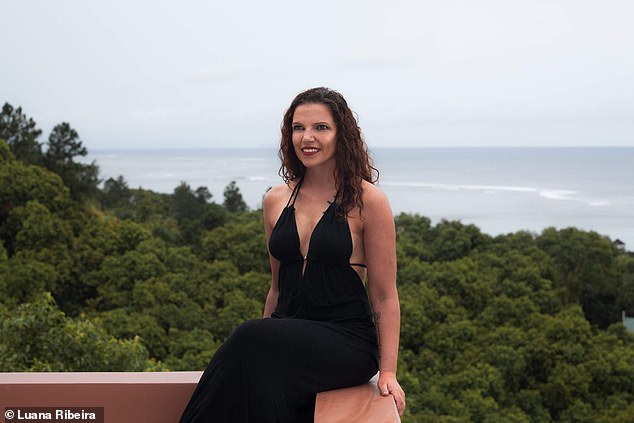 Luana says that living in a ditch filled with mud had both its good and bad points.

‘Sometimes, it was complete peace and tranquility,’ she said. ‘We rarely looked at the time – we’d get up when the sun got up and go to sleep as it got dark as we had no light.’

‘There was one night when I had taken myself to bed and Al asked me why I was going to bed so early. I said ‘It’s dark!’ and he replied ‘No, you’re wearing sunglasses.’ I must have forgotten I had them on!’

She continued: ‘This might sound silly but it gave me huge appreciation for the small things. Waking up every morning in the fresh air was incredible.’

‘The place we now call the Freedom sanctuary, was surrounded by woods and a river. Very healing! Every morning, I’d go to the river to meditate. There was a waterfall where we took a “shower” and it’s also where we drank from as we had no running water. If I wasn’t working, you’d find me among the trees.’

However, Luana found running a business online with no power, internet or transport increasingly challenging.

‘The nearest café where I could charge up my devices would take three hours to get there and back, so that’s what I did,’ she said. ‘I loved those walks. I rarely saw anyone until I got into the village and the scenery was stunning. But it was challenging to run a business this way.’ 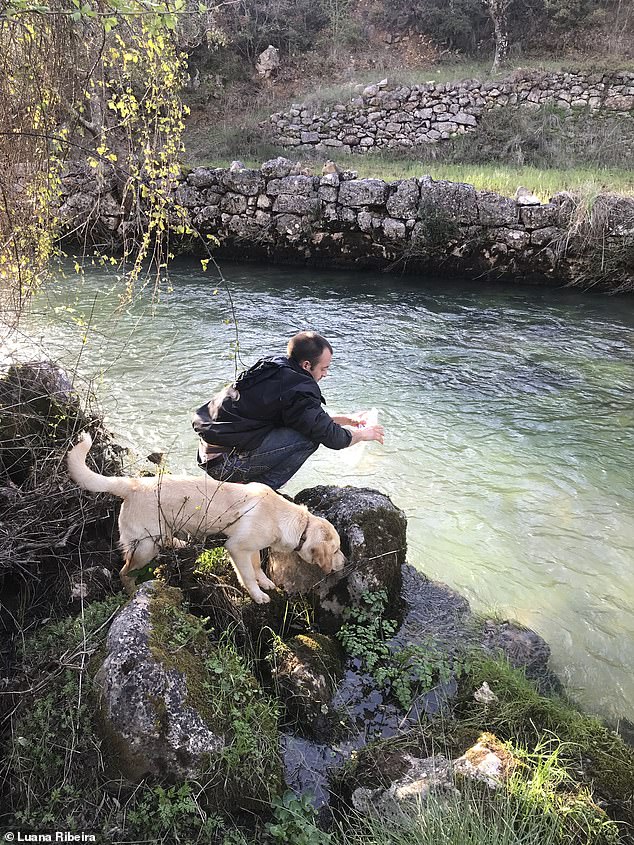 Luana would go to the river (pictured) to meditate, and there was also a waterfall where the couple would ‘shower’

‘I had very limited time in which I could access the internet. I started writing my first book, Passion to Freedom, and was being offered radio and Podcast interviews that I didn’t feel like I could accept because I had nowhere to go that I could rely on being quiet.’

She continued: ‘I went through a phase of feeling like I was living a double life of one minute being in the mud and the next, jetting off to 5* hotels for TV interviews and to speak on stages around the world.’

‘It was this that finally led me to move out of the ditch and into an apartment nearby. I left Al behind, who was still working hard on the build – he had made a little house out of mud by this point, and I moved into an apartment in the city.

‘It was hard being away with no contact! In time, we arranged wifi, a great solar system for power and water so it got easier as time went on.’

Now, the couple are living together in Anglesey, Wales, and are going stronger than ever.

‘I’d love to be able to say that the sanctuary opened and we rescued lots of animals and everything turned out nicely, but unfortunately it wasn’t to be,’ said Luana. ‘We faced too much opposition and, devastated, we moved away from the area while we figured out our next move.’

She added: ‘We don’t know what will happen for the sanctuary… time will tell. Al and I are still going strong. No longer living wild and are in a house on Anglesey.

Here’s the latest proof that marriage is dying

written by Catey Hill on May 25, 2017 The number of unmarried people buying homes together is on the rise The key ring is the new wedding ring. It used to be that you fell […]

Written by Xuefeng on December 3, 2017 Life in the New Oasis is rich, colorful, free, and happy. Working in the Oasis is romantic and poetic. Do you doubt my words? Please have a look.  Source: http://newoasisforlife.org/new/forum.php?mod=viewthread&tid=732

Let us see what our most dedicated Foyi celestial is doing

Written by Xuefeng on Feb 24, 2018 Wherever we are, whether on a barren island or in a desert, Foyi celestial always makes us thrive to create paradises on Earth. What is beyond his abilities? I […]