“If it was my mum, grandma or son, I’d want someone looking after them”, says ex-Royal Marine commando, Sam Murray, who in April found himself volunteering as a mortuary technician, in response to the strain key workers suddenly faced. Having served in the marines from 1988 through to 1996, Murray had spotted a plea for help from fellow former marine Richard Sharp on social media. As CEO of charity Re:Act Disaster Response (formerly Team Rubicon UK), Sharp had requested military veterans urgently lend their skills to the crisis, which Murray says he was eager to do.

“When Covid-19 was starting, I could see it all unfolding and wanted to help,” he says. “I thought: ‘I can’t just sit here, I need to do something.’ I saw they needed veteran volunteers, so I rang Richard up and said: ‘Right, get me involved.’” It meant Murray was given the daunting task of selecting, training and heading up a team of 12 veteran volunteers to work as mortuary technicians for five weeks. Stationing the teams across two hospital mortuaries in the north-west, Murray worked across both for three weeks. What he saw changed his life.

Tasked with handling the deceased before taking measurements for their coffins,
the volume of work the technicians faced was staggering, he says. “In a normal 24-hour period in hospital you’d have one or two deaths occurring – not including people arriving in ambulances. At the spike, they were receiving 20 a day, sometimes more. I can’t imagine how the technicians did it before we got there.” 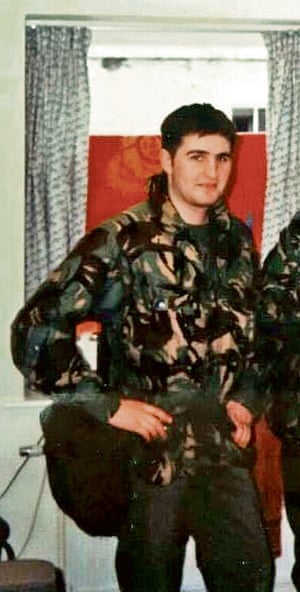 Murray in his commando days

It was difficult to ignore the reason for the huge rise in numbers, not to mention the risk of contamination. “If you have 15 to 20 bodies coming down from a ward where normally you have two and 80% of those [are labelled] ‘high risk of infection’, it doesn’t take a rocket scientist to work out you’re handling people who have died of Covid-19,” he says.

Any discomfort Murray initially felt was quickly put into perspective. “At first it was horrible and one guy had to leave because he didn’t like it, understandably. Then I thought: ‘Well someone’s got to do it.’” But having previously suffered from depression and PTSD, friends questioned whether the role was a good fit. “People were asking me if it would be good for my mental health and I thought: ‘Well, it is, because I’m doing something.’ If the bodies had suspected covid, we’d put them into sealed coffins, which meant families didn’t even get to see them. I kept thinking: ‘I’m the last person who’s going to see them’, which gave me a sense of purpose and duty, like I was doing something worthwhile. It felt like I was helping my country, really, just as I did in the marines. At least I could make sure they were looked after.”

Murray is one of a growing number of veterans who have lent their support during the Covid-19 pandemic. As Johnny Mercer, minister for defence, people and veterans, says: “Those who’ve served in the armed forces have developed a vast array of skills during their career, meaning they can play a huge part now in our national effort to tackle coronavirus. We have seen many veterans making a fantastic contribution during the pandemic, through helping out the vulnerable in their local communities, to running mobile testing sites nationally. We cannot thank them enough for their efforts.”

To date, Re:Act has deployed more than 200 volunteers and has helped to ensure 2,700 deceased patients have been cared for, 1,000 hospital beds have been installed and 5.4m PPE items distributed.

Now Murray wants to share his experience so we can learn from it. “People need to know that Covid-19 kills people and if you don’t act sensibly, it’s going to happen again. I can see people out and about already forgetting and it can be frustrating when you’ve seen what I’ve seen,” he says.

He is passionate about ensuring the work of the mortuary technicians – like the doctors, nurses and supermarket workers before them – is talked about. “Those technicians were on their own before we arrived. I dedicate everything I do to them, they were absolutely amazing, brave and cheerful. That’s the commando ethos – cheerfulness in the face of adversity. They’re incredibly brave, doing a job nobody wants to do.”

But while many veterans are volunteering for the first time, Murray is no stranger to this work. After leaving the marines – where he specialised in Arctic warfare – he turned to security and close protection services, running his own surveillance business until last year. “It was a horrible world, but one of the last jobs I did was for an animal rights company,” he explains. “I remember thinking: ‘I’m doing something worthwhile – I’m helping animals and using my skills.’’’ It led Murray to change tack completely, leaving behind his successful business. “I thought: ‘I can’t go back to that world, I’m going to do good,’” he says.

Having suffered from poor mental health after leaving the marines, Murray explains he attempted to take his own life five years ago. It meant he was put in touch with armed forces charity Rock2Recovery, which sparked a friendship with Dan Elliot. “I went to hospital and they helped me get back on my feet,” he says. “I formed a friendship with Dan, who is an amazing guy. You can’t put a finger on how many lives that man has saved. I’ve lost four close friends to suicide in the past four years and I’ve been in hospital in various states of PTSD or depression, whatever you want to call it,” he says.

Murray’s involvement with the charity – and his friendship with Elliot – opened his eyes to the volume of military and blue light workers also suffering from poor mental health. Now in a stable, healthy place, Murray devotes his time to connecting with
these workers via social media, where he shares videos about his experiences. “There are thousands of people who want help,” he says. “I tell them about my problems and we speak for hours – they’ll call me at night to talk. Many of them have never opened up to anyone before.”

They meet in person, too. Having discovered the Wim Hof method – which combines cold-water exposure, breathing techniques and meditation, and Murray credits with saving his life – he invites veterans and those still serving to visit his home in the Peak District, sharing the vital skills and techniques. “They drive hundreds of miles and I take them to the river and we do Wim Hof breathing and jump in the river,” he says. “I’ve had lads and girls saying: ‘You’ve saved my life.’ I think it shows young people that suicide is not the answer and that you can come through the other side. I’m starting to live my life now and I’ve never felt so alive. It saved me, so I teach it.” 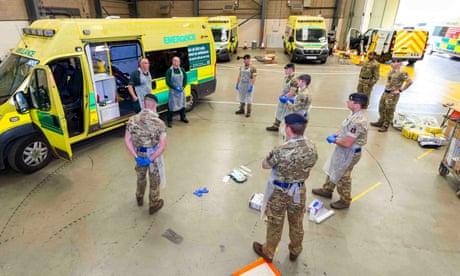 ‘It’s an emotional rollercoaster’: the military couple working on the coronavirus frontline

Paid for by UK Government

While his role in the mortuaries has come to an end, Murray is still volunteering with Re:Act, with his latest job safely housing homeless people in nearby St Helens. “I believe this is what I was supposed to do – helping people. It’s my calling”, he says, when asked why he’s doing it. “I think by doing good things and by volunteering, it helps them and it helps me. I also hope that by teaching – and showing people through doing – that they might volunteer more. I’m confident we’ll find positives during this terrible time.”

Next, Murray plans to buy a camper van to travel throughout Britain, visiting members of the armed forces, blue light workers and now, mortuary technicians too, to further spread his message and teach the breathing techniques he practises daily. His hope for the country is simple: “During Covid-19, I noticed we’re a community and everyone was looking after the vulnerable and the elderly, which was great but we should be doing that anyway. My message? To keep that going and get people to be kinder, that’s all I’m trying to do.”

In the UK and Ireland, Samaritans can be contacted on 116 123 or email jo@samaritans.org or jo@samaritans.ie. In the US, the National Suicide Prevention Lifeline is 1-800-273-8255. In Australia, the crisis support service Lifeline is 13 11 14. Other international helplines can be found at www.befrienders.org.

This advertiser content was paid for by the UK government. All together is a government-backed initiative tasked with informing the UK about the Covid-19 pandemic