Did the world wake up to climate change in 2018? Or are we falling deeper into ignorance about the environmental changes happening all around us?

The increasingly severe effects of the rise in global temperature are being felt everywhere on the planet through extreme weather events and natural disasters, serving as a wake-up call to the impacts of climate change… for those who are willing to listen. Scientific studies have demonstrated that we are poised on the cusp of worldwide disaster, and the global community is becoming increasingly aware of the impending crisis. Many are demanding action; the world’s nations and innovators are exploring new technologies for sustainable energy production to prevent a global catastrophe.

According to the  Intergovernmental Panel on Climate Change (IPCC), a body dedicated to providing an objective view on climate change, 2018 is a tipping point for the global environment. In 2018, we needed a pivotal year for climate action.

Here are 6 significant climate change themes that emerged during the year.

Weather events and environmental disasters are determined by a variety of complex factors, both natural and man-made. It is impossible to attribute any single weather phenomenon directly to climate change. Science makes it possible to ascertain how much climate change influences weather events, however. Scientific analysis reveals that the rise in global temperature is more than a minor component of natural disasters and extreme weather events. In many cases, it serves as an essential factor.

Nearly every region on the planet experienced extreme weather and natural disasters in 2018.

The hurricanes of Florence and Michael caused massive destruction in the southeast U.S. during the Atlantic storm season. In the Pacific, Super Typhoons Mangkhut and Yutu rocked the Philippines, Guam, South China and the Mariana Islands. Argentina and Uruguay experienced severe drought. The U.S. state of California experienced the deadliest and most destructive wildfires on record and Europe has seen extremes in both cold and heat this year.

Heavy rainfall contributed to flooding and landslides in Africa, India, Japan, Korea and the Caribbean islands of Grenada and Trinidad in 2018. Millions of people were displaced and there has been widespread destruction of homes and infrastructure. Flood conditions have exacerbated outbreaks of cholera in East Africa and leptospirosis (“rat fever”) in India.

In mid-December, the Centre of Research on the Epidemiology of Disasters reported that approximately 5,000 people have died and 28.9 million needed emergency assistance worldwide because of extreme weather. Research indicates that economic losses from climate-related disasters have increased 151% in the past 20 years, a trend that is only expected to worsen.

More scientists than ever are turning attention to studying the impacts of climate change.

This year saw new studies that have broadened our understanding of the consequences of the rise in global temperature. In October, the UN Intergovernmental Panel on Climate Change (IPCC) released a landmark report revealing that global temperatures are moving towards a catastrophic 3° C rise during this century. The study encourages rapid and unprecedented changes to reduce global temperature increase to at least 1.5° C.

Also released in October, in advance of the COP24 United Nations Climate Change Conference,  the United Nations Environmental Emissions Gap Report made it clear that current Nationally Determined Contributions (NDCs) are inadequate to bridge the emissions gap by the target date of 2030. The report asserts that urgent action is required to avert the catastrophic consequences of an undeterred rise in global temperatures.

International NASA-led studies have been studying Arctic ice loss and its impact on glacial activity, sea level and drifts in rhe Earth’s spin axis. The results of these studies make it clear that the planet-wide effects of climate change are profound.

Research has also demonstrated that the planet is in the midst of an extinction crisis. Earth is currently experiencing the most significant species die-off since the event that caused the extinction of the dinosaurs 65 million years ago. Whereas previous extinction events were caused by such things as asteroid strikes and natural shifts in environmental conditions, the current event is being driven by human activities.

With the growing urgency behind the science, international activists mobilized in London to draw attention to this ecological and environmental emergency. Extinction Rebellion (XR) protestors called upon the government, private corporations and the media to recognize the dire effects of climate change on the planet’s species.

The Extinction Rebellion was only one movement of many this year that sought to protest a lack of climate action. Groups such as The People’s Climate Movement, Rise for Climate and Strike 4 Climate Action mobilized to demand an appropriate response to the crisis facing our planet.

Another notable event was the March for Climate, which took place during COP24, the biggest climate change meeting since the Paris Agreement of 2015. In spite of the fact that the march occurred as part of an international climate change conference, peaceful protestors were greeted with an oppressive Polish law enforcement presence.

The IPCC and UN emissions gap reports, combined with COP24, left the subject of the rise in global temperature at the forefront of international dialogue.

Scientific evidence has made the impact and impending consequences of climate change clear. Widespread international commitment to taking decisive action in the face of this crisis has remained sluggish, however. The host country of COP24, Poland, sent mixed messages by putting coal at the center of the conference. One of the world’s leading emitters, the U.S., has positioned itself to withdraw from the Paris Agreement at the earliest possible opportunity.

Citing the example being set by the Trump administration in the U.S., other nations are declining to cooperate with the international community in climate change efforts. Brazil, the initial intended host country of COP25, has withdrawn from that commitment. Meanwhile, Kuwait, Russia, Saudi Arabia joined the U.S. in refusing to welcome the landmark IPCC study into the COP24 negotiations.

Incoming members of the U.S. Congress are rejecting the stance of the current presidential administration, however. Proponents of green technologies and sustainability initiatives are championing a Green New Deal, a plan to modernize infrastructure and invest heavily in clean and renewable energy production. While described as a “radical” plan by those with ties to the fossil fuel industry, “extreme” measures are called for by the U.S. to avert global disaster.

Where there has been foot-dragging on the political front, innovators and private companies are responding to the call for the development and implementation of new technologies. Progress is being made with energy storage and microgrid systems that utilize Artificial Intelligence (AI), Internet Of Things (IoT) and blockchain to improve efficiency and financing opportunities.

In many developing countries, renewable energy provides an opportunity to improve quality of life and adapt to the impacts of climate change. Small-scale solar home systems provide an affordable option in countries with low access to electricity. With the price of renewable energy continuing to fall, the economic benefits of renewable energy are clear from Botswana to Boston.

These technological innovations are some of the most important things to watch in 2019. 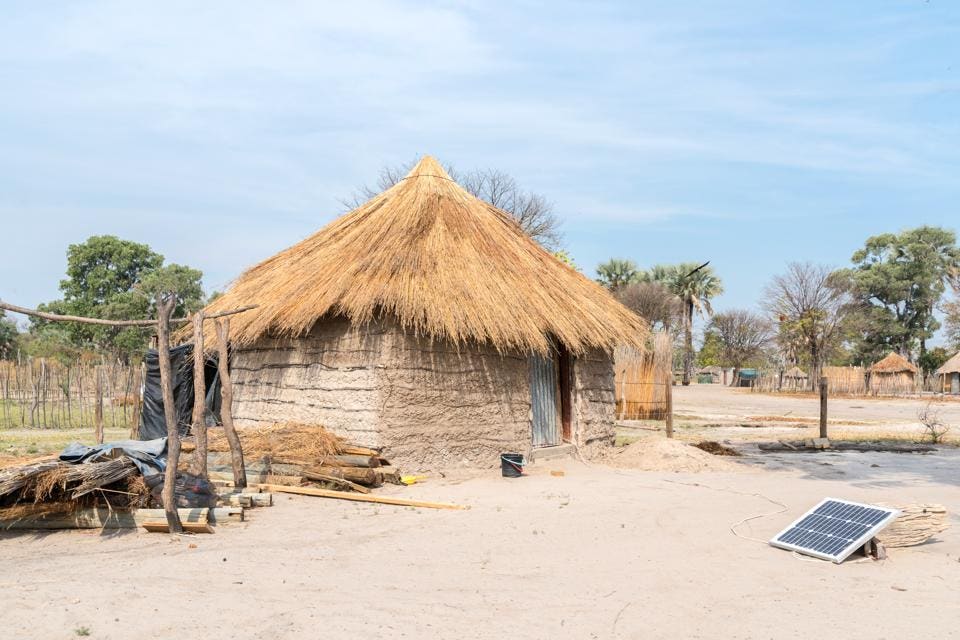 Okavango delta, Botswana: Despite being a multi-billion tourist business, the locals living on the Okavango delta have not benefited much from all the money that has been poured. Still, a lot of people live in the traditional huts with no access to electricity.GETTY

On the front lines of feeling the effects of climate change, it is no surprise that small island developing states (SIDS) in the Caribbean have taken a position of leadership in implementing new energy and sustainability initiatives. Aiming to become the world’s first climate-smart zone, 26 countries and more than 40 private sector partners have created a coalition to fast track climate action in the Caribbean region.

Strategic partnerships and committed funding for climate-smart investments are being dedicated to reducing emissions and climate-related hazards while supporting healthy ecosystems and securing renewable energy production. This climate-smart zone will reduce vulnerability to the effects of climate change while also building economic security for its citizens.

Around the world, others are also turning their minds and hands towards developing solutions for the challenges presented by climate change.

The Nobel Economic Sciences Prize Committee demonstrated the multi-disciplinary importance of the subject with its 2018 award. The prize this year went to economists William Nordhaus and Paul Romer, who adapted the western economic growth model to focus on environmental issues. This recognition of the urgent problem of climate change and the need for multi-disciplinary approaches to addressing it is significant.

Other climate action leaders have been recognized this year for efforts to reduce emissions and promote sustainability in everything from school cafeterias to football clubs. Where action may be slow on the part of governments and international groups, it is clear that individuals, academics and private companies are stepping up to provide real-world solutions to address the challenge of climate change.

Awareness and education about climate change matters increased this year. Journalists and public figures used entertainment media and the internet to draw attention to the problem of climate change and the need to pursue sustainable measures in all areas of society.

In the face of what has largely been a climate change media blackout in the in U.S., more than 100 meteorologists wore matching ties during their summer solstice broadcasts to demonstrate awareness and solidarity. In Zambia, comic artist Mwelwa Musonko created and launched a new comic series to raise awareness about climate change.

In an attempt to wake up those most resistant, scientists reported this year that climate change stands to produce a worldwide beer shortage. As beer is made with barley, a particularly climate-sensitive crop, the continued rise in global temperature will eventually make the beverage rare and expensive. If extreme weather events, mass extinctions and the wobbling of the Earth itself aren’t compelling enough on their own, perhaps a threat to the world’s most popular alcoholic beverage will inspire more people to take action.

The solid scientific evidence, new innovations and growing awareness that emerged in 2018 should give some promising signs for the coming year. Sustainable technologies are no longer simply an acceptable form of energy production, they are quickly becoming the preferred method for energy generation.