By Emily Webber For Mailonline

A family string quartet who were stopped by police for performing in their garden were invited to play at the hospice they were raising money for to celebrate VE Day.

Violinist Rafael Todes, 53, a member of the Allegri String Quartet, his wife Helena Newman, 53, and children Isabella, 17, and Max, 18, had been performing Shostakovich’s String Quartet No4 when police arrived to their property in Bayswater, west London, last month.

The talented instrumentalists, who had been performing an ensemble from their front garden during lockdown, were told by two officers that their music may encourage residents to gather and flout lockdown rules.

But today, the family, who have dubbed themselves the ‘Alexander Street Quartet’, were invited to play in the gardens of St John’s Hospice, St John’s Wood, North London, to commemorate VE day. 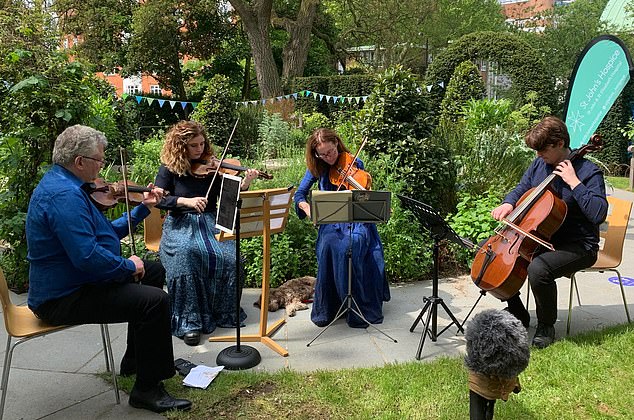 From left to right: Violinist Rafael Todes, 53, a member of the Allegri String Quartet, daughter and student at the Royal College of Music Isabella, 17, wife Helena, and Max, 18, who has accepted an offer to read music at St John’s College, University of Cambridge

The performance was also live-streamed on the St John’s Hospice Facebook page as the quartet delivered a range of classical pieces including Mozart and Elgar with the family raising £1,355.

Mr Todes, who is a teacher at the Royal Academy of Music, said he was ‘delighted’ to take the ‘pop-up’ orchestra to the place which cared for his late father who passed away aged 77 in 2008.

Speaking to FEMAIL, Isabella, who is a student at the Royal College of Music, said: ‘It was a lovely experience playing in their beautiful garden, and even though we were not playing to a live audience, there was an exciting energy to the performance.’

Mr Todes, who is a teacher at the Royal Academy of Music, said he was ‘delighted’ to take the ‘pop-up’ orchestra to the place which cared for his late father 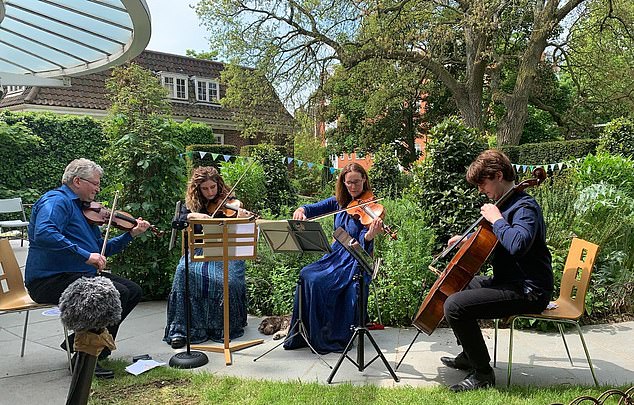 Footage shows the family performing Dame Vera Lynn’s We’ll Meet Again, in the 2016 award-winning Chelsea Flower Show garden at the hospice, as residents enjoyed the music through their open windows

Ahead of the performance, Mr Todes said: ‘I’m delighted to be able to take our pop-up street concert to the very place in which we are intending any money raised to go to.

‘It also has special significance for me and the family as we are very grateful to St John’s Hospice for the excellent care received by my late father, so it seems a fitting place for us to perform one of our livestream concerts.’

St John’s Hospice has been heavily impacted by the Covid-19 pandemic resulting from the closure of two charity shops and fundraising events being cancelled or postponed.

The Hospice provides specialised palliative care to more than 4,000 terminally-ill patients and their families every year, and is free to those who need it with funding through NHS grants, donations and profits from the charitable St John and Elizabeth Hospital. 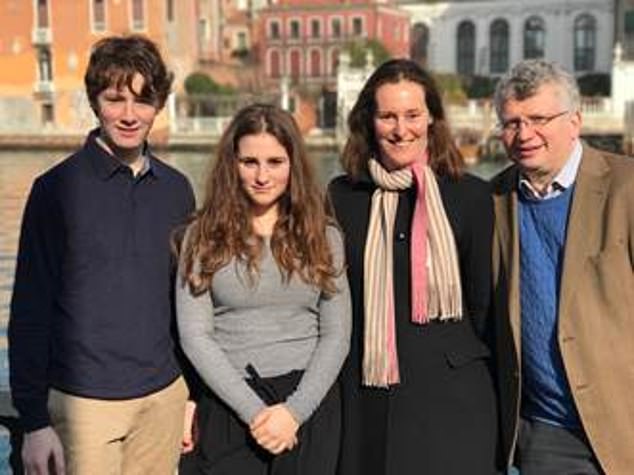 Sue Hutton, Assistant Director of Nursing, St John’s Hospice added: ‘We are very appreciative of the Todes family for their kindness in raising money for our COVID-19 emergency fund.

‘This will be invaluable in helping ensure our specialist teams can be more agile and enable them to better reach and provide for patients that are now increasingly isolated and vulnerable at home during the pandemic.’

The musically-gifted four have since been sharing their small concerts on Facebook with Mr Todes’ daughter Isabella, playing the violin, son Max, playing the cello and wife Helena playing the viola, after they rose to fame last month.

Footage filmed by the family showed one of the officers apologetically tell them: ‘I don’t enjoy this part of the job but it’s going to cause the street to keep gathering. I’m not here to fine you don’t worry but the whole street can’t be doing this.

‘I hear what you’re doing, it’s good music but obviously it’s going to keep causing the street to block. I do apologise, it’s very good.’

Mr Todes revealed that the family first began their street performances after a resident requested a performance for another neighbour’s birthday.

The violinist told The Daily Telegraph: ‘About five weeks ago a neighbour asked us during lockdown whether we could do a little concert for the lady who lived upstairs.

‘So we did that and people in the street watched and somebody said ”you’ve got to do this again next week”.’

The musician, who agreed to put his public concerts on hold in accordance with police advice, added that there was a certain irony that the very piece of music the family had been playing had been written by Shostakovich when he was terrified of being arrested by Joseph Stalin’s regime.

He added: ‘Just before we played, I gave a little speech about Shostakovich and how he was out of favour when he wrote this and he was terrified that he was going to be arrested by Stalin’s people.’ 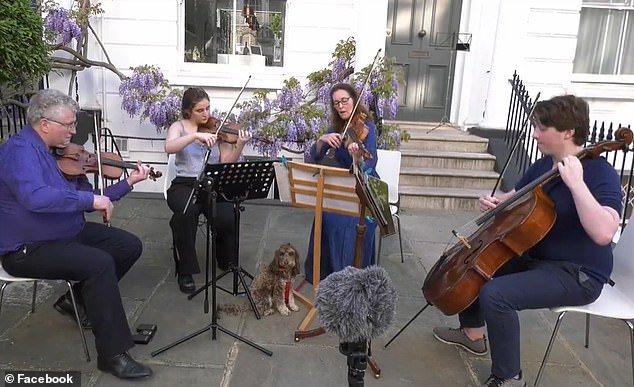 Violinist Rafael Todes (left), 53, his wife Helena Newman (third from left), and children Isabella (second from left) and Max (right), from west London, had been performing Shostakovich’s String Quartet No4

Mr Todes, who is a teacher at the Royal Academy of Music, later shared the footage of his family playing the piece on Facebook 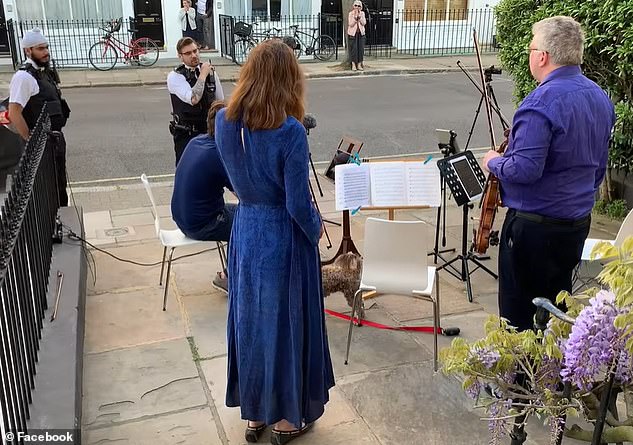 The family, who had playing the classical piece from their front garden, were asked by the police officers to stop performing

Joggers and drinkers: what a day in the life of a Leeds park tells us about modern Britain