More Chinese are getting divorced and fewer are getting married, and the government is growing concerned.

According to figures released recently by the Ministry of Civil Affairs, the “crude divorce rate” – which measures the number of separations for every 1,000 people in the population – doubled in the decade through 2016 from 1.46 to three.

The number of couples who actually divorced last year rose 8.3 per cent from 2015 to 4.2 million, the ministry said. And according to its most recent figures, the trend looks set to continue, with 1.9 million couples getting divorced in the first six months of this year, a rise of 10.3 per cent from the same period of 2016. 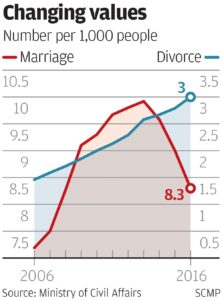 How much does it cost a man to get married in China? Clue: it involves a flat and wads of cash

Although the crude marriage rate was higher last year than it was in 2006, the recent trend has also been downwards. From a peak of 9.92 per thousand people in 2013, the figure for last year was just 8.3, the ministry said, adding that the number of couples who actually married in 2016 fell 6.7 per cent from the previous year to 11.4 million.

Sandy To Sin-chi, a Hong Kong-based sociologist, said the soaring divorce rate could be partly attributed to changing attitudes among women, who have a greater sense of their own worth.

“Women are now less willing to tolerate an unhappy marriage,” To said. “They are more independent and financially equipped, and they can opt out if things go wrong.”

The rise in the number of failed marriages is a major concern for the government, however, as it regards families as the building blocks of a stable society.

The ministry said that while the higher numbers of people separating reflected a growing acceptance of divorce in society, it warned of “irrational divorces” and called for people to have a more responsible attitude towards marriage.

The Beijing marriage market: putting a price on a perfect match in a Chinese park

Yu Tao, a political sociologist at the University of Western Australia, said that China’s leaders were increasingly turning to Confucian ideologies, by promoting the belief that happy marriages contribute to a stable and harmonious society.

“Their concern with marriage [and divorce] is part of a wider push for a return to traditional values,” Yu said. “In the traditional narrative, society is a collection of different families.”

Under the initiative, several courts in Shanghai, and the provinces of Sichuan and Henan now require couples who apply for a divorce to embark on a three- to six-month “cooling period” before allowing them to continue, Beijing Youth Daily reported.

Similarly, in the city of Zhongshan, southern China’s Guangdong province, people filing for divorce are required to attend mediation classes.

Published on 06/06/2018, 3:02pm Influential agency recommends China, which is likely to beat its 2030 target for cutting carbon, revisit the pledge it made to the UN deal By Karl Mathiesen An influential government thinktank has recommended […]

BY KIM PARKER AND RENEE STEPLER on SEPTEMBER 14, 2017 Half of U.S. adults today are married, a share that has remained relatively stable in recent years but is down 9 percentage points over the […]