Isadon is the founder of Konohana Family and he is also the spiritual guider. He was an interior decorator when he was young. And he liked to climb the Mt Fuji. Mt Fuji is one of the world’s largest active volcanoes and is very famous in the world. It is also the sacred symbol of Japan. Japanese believe that there was a goddess who was guarding the Mt Fuji all the time. And the name of the goddess is Konohana. In 1994, when Isadon was 42 years old, he and 20 like-minded Mt Fuji climbing team members established the Konohana Family which was a big family beyond a kinship family. Konohana Family has been developed for 19 years till now. His wife, daughter and son are living in the Konohana Family too. Isadon is also a professional beekeeper and in charge of beekeeping. He is the president of  the local beekeeping association. I wasn’t aware that there is a spiritual guider in Konohana Family until the time close to come to Japan. I was curious about what kind of person he is in real life and looking forward to meeting him. Since I had been lived in the Konohana Family for several days, I began to know more about Isadon and found that there are a few similarities between Guide Xuefeng and him.

In daily life, same as other Konohana members, Isadon is very approachable and down to earth. But when you are close to him, you can feel his special energy, which is different from others. Every day, he does his work as other members. During the week that I worked in the field, I also spent two days in the warehouse to nurse seedlings. And the apiary is near the warehouse and I saw Isadon wearing the uniform and very focused on the beekeeping. During the break, he had watermelons and juice with other members together, and chatting and laughing a lot. He is very easy-going. During the night meeting, he usually would give members spiritual guidance according to what happened in the daily life. He talks like telling stories and speaks slowly like a older brother.

Similar to our guide Xuefeng, Isadon is also very cheerful, humorous and playful. When playing happily, he dances with joy and acts like a child. Two days ago, when Konohana Family celebrated summer festival, he sang with the children and danced with the members and everyone had a great time. When we played in the river the day before yesterday, he did splashing and water fighting with other members and got totally wet, it was great fun!

Wondering what he looks like? Here are the photos. 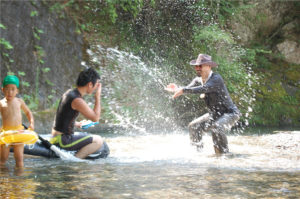 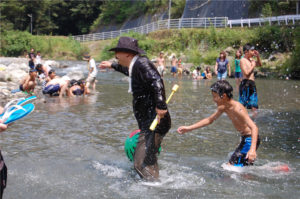 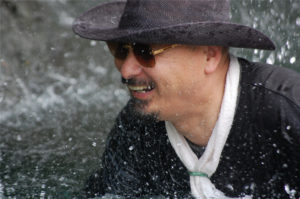 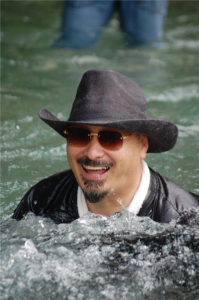 Konohana Family is an agriculture-based community at the foot of Mt. Fuji where 89 non blood-related members live as one big family (as of 2018 Feb.). In 1994, 20 members found Konohana Farm, which then […]

It is our pleasure to announce to you that the Second Home of Lifechanyuan (herein after referred to as Lifechanyuan ) and Konohana Family, ecovillages that are born in China and Japan, have had conversations with […]

I like his smile, very charming and natural, haha…..

He looks very kind. a person that makes me respect.

Wow, what a charming man! I like his smile, too!

Spiritual guide or teacher is expected first to be an easy-going, charming and humorous person, isn’t it? haha…

Mr.Isadon is a friendly man, he is a saint.