A new report finds more than 16 million Americans are raising children without being married – and increasingly doing so with a live-in partner.

When Aron Womack and his son moved in with his girlfriend Michelle, they had been dating for almost two years. His lease on an apartment with a fellow divorced dad was up and he and Michelle had already had discussions about joining her at her house.

“It just made sense,” Womack says. Then they started planning to have children together – four years later they are raising them together – but still have not tied the knot.

“She wanted to have kids and I was totally good with that.” he says. “I didn’t think marriage was a barrier.”

In 1968, 88% of unmarried parents were solo mothers. As of last year, that number had fallen to 53%. But there’s not a sudden rise of single dads – the change is entirely made up of parents who are raising children – and living together – without being married, according to a new report by Pew Research Center.

This trend has been ongoing for decades, but in 2017 the percentage of unmarried cohabitating parents reached a new high – 35%. 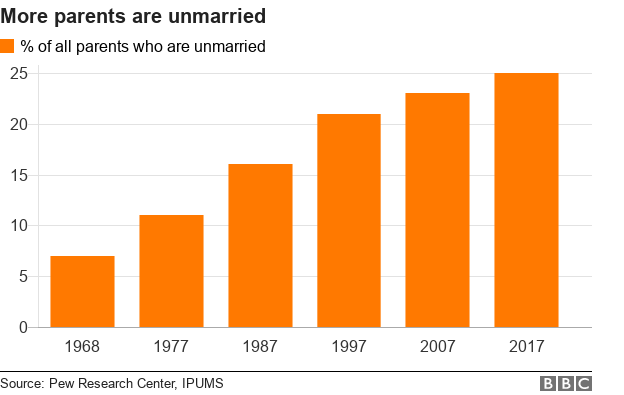 Overall, most parents in the US are married – 65% of all people who are raising children – but one in three children live in a household where their parent is unmarried (whether it’s a solo or two-parent household).

And in total numbers, there are more children being raised by solo mothers and fathers than there were in 1968.

Overall marriage rates in the US have dropped significantly in the past 40 years, and the age of first marriage is rising.

Stephanie Coontz, director of research at the Council of Contemporary Families, says the change follows a combination of trends – a rise in both the expectations of what marriage means, and the likelihood of divorce – making it a “high-risk, high-reward” situation that some are reluctant to enter; a greater ability to raise children outside of marriage, as well higher inequality and volatility among lower-income Americans, which reduces the ability to plan long-term.

“People do think that marriage is a less sacred institution than it used to be, but a more sacred relationship,” she says. 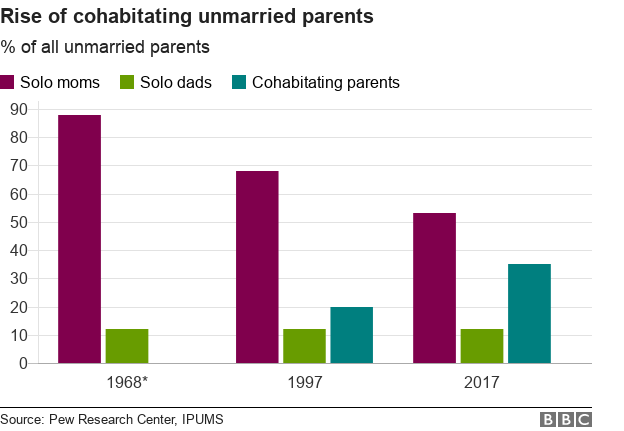 “So if the relationship is what is sacred and valuable – you don’t have to stay it if it ends – versus if you think the institution is more important.”

Coontz says its unclear if some of the growing share of unmarried parent couples will eventually get married – a pattern often seen in Scandinavian countries.

Unmarried parents living together tend to be younger, less likely to have ever been married and have more children than solo parents, according to the Pew report. They are also less likely to be living in poverty.

While cohabitating parents have been more common, American attitudes towards two people raising children together without being married is not strongly positive. 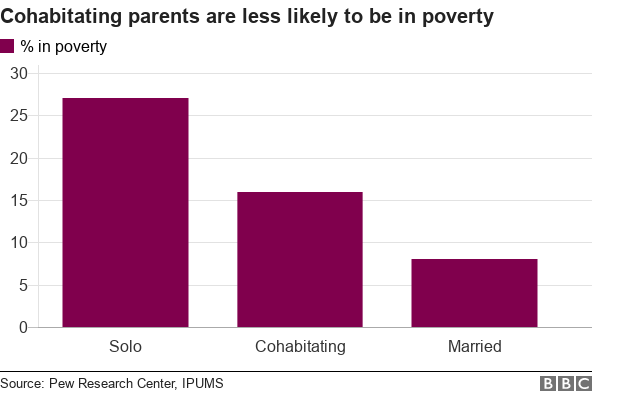 A 2015 survey by Pew found 48% of adults thought the trend of more unmarried couples raising children was “bad for society”. Two-thirds felt the same way about the rise of single mothers.

Aron asked Michelle to marry him after their first child was born but “it’s a coin flip” whether it will happen, he says. Relatives and friends sometimes ask the couple when they are getting married but he says it doesn’t bother him.

“The only grief I’ve every gotten was from her grandparents.”

“It really wouldn’t matter either way” if they were married, Aron says, although he adds there would be a few legal things that would be easier, including insurance.

Defying Prevention Efforts, Suicide Rates Are Climbing Across the Nation

By Benedict Carey June 7, 2018 Suicide rates rose steadily in nearly every state from 1999 to 2016, increasing 25 percent nationally, the Centers for Disease Control and Prevention reported on Thursday. In 2016, there […]

By Abigail Miller For Dailymail.com 17 February 2018 Fort Belknap, Montana, saw temperatures rise 82 degrees over the day Tuesday It was 37 degrees below zero in the morning and rose to a high of […]