Australia is in the midst of a full-blown land-clearing crisis. Projections suggest that in the two decades to 2030, 3m hectares of untouched forest will have been bulldozed in eastern Australia.

The crisis is driven primarily by a booming livestock industry but is ushered in by governments that fail to introduce restrictions and refuse to apply existing restrictions.

And more than just trees are at stake.

Australia has a rich biodiversity, with nearly 8% of all Earth’s plant and animal species finding a home on the continent. About 85% of the country’s plants, 84% of its mammals and 45% of its birds are found nowhere else.

But land clearing is putting that at risk. About three-quarters of Australia’s 1,640 plants and animals listed by the government as threatened have habitat loss listed as one of their main threats.

Much of the land clearing in Queensland – which accounts for the majority in Australia – drives pollution into rivers that drain on to the Great Barrier Reef, adding to the pressures on it.

And of course land clearing is exacerbating climate change. In 1990, before short-lived land-clearing controls came into place, a quarter of Australia’s total greenhouse gas emissions were caused by deforestation. Emissions from land clearing dropped after 2010 but are rising sharply again.

“It has gotten so bad that WWF International put it on the list of global deforestation fronts, the only one in the developed world on that list,” says Martin Taylor, the protected areas and conservation science manager at WWF Australia.

In Queensland, where there is both the most clearing and the best data on clearing, trees are being bulldozed at a phenomenal rate.

About 395,000 hectares of native vegetation were cleared there in 2015-16, 33% more compared with the previous year. And despite the re-elected Labor government promising changes to rein it in, notifications of planned land clearing in Queensland have jumped a further 30%, suggesting woodlands could be bulldozed even faster in coming years.

To visualise what clearing of that magnitude looks like, Guardian Australia has created a tool that will lay an area that size over any location you choose. Mapped over Sydney, for example, 395,000 hectares covers an area stretching from the central coast in the north, to Campbeltown in the south, and the Blue Mountains in the west.

That equates to more than 1,500 football fields worth of native woodland and scrub being cleared each and every day in Queensland.

Stopping the clearing in Queensland is possible. Indeed, under its Labor premier Peter Beattie it brought its land clearing problem under control. Tough laws passed in 2004 meant that by 2010 land clearing had dropped to an all-time low of about 92,000 hectares.

But when the Liberal National party’s Campbell Newman was elected in 2012 he broke an election promise to keep the laws, gutted them, and introduced several ways for farmers to clear land easily. The bulldozers roared back into action immediately, bringing the state to the point it is at now.

Queensland clears more land each year than the rest of Australia put together, and the rate at which it is destroying its vegetation is comparable with the infamous deforestation that occurs in the Brazilian Amazon. Brazil bulldozes about 0.25% of its part of the Amazon each year; Queensland clears about 0.45% of its remaining wooded areas.

The recently re-elected Queensland Labor government has promised to change the laws. But in the meantime other states have begun to follow Queensland’s lead.

In 2016 the New South Wales Coalition government announced it was going to axe three pieces of legislation that protected native vegetation and wildlife, and replace them with a single act that would make land clearing easier.

A conservation scientist from the University of Queensland, Hugh Possingham, sat on the NSW government’s advisory board for the changes but resigned in protest, warning they could lead to a doubling of clearing rates in NSW.

Possingham says exactly how much the laws will impact clearing rates is unclear, since there are other drivers of clearing, including climate and economics. “But if you look at Queensland, their example is so dramatic,” he says of the effects of law changes there. 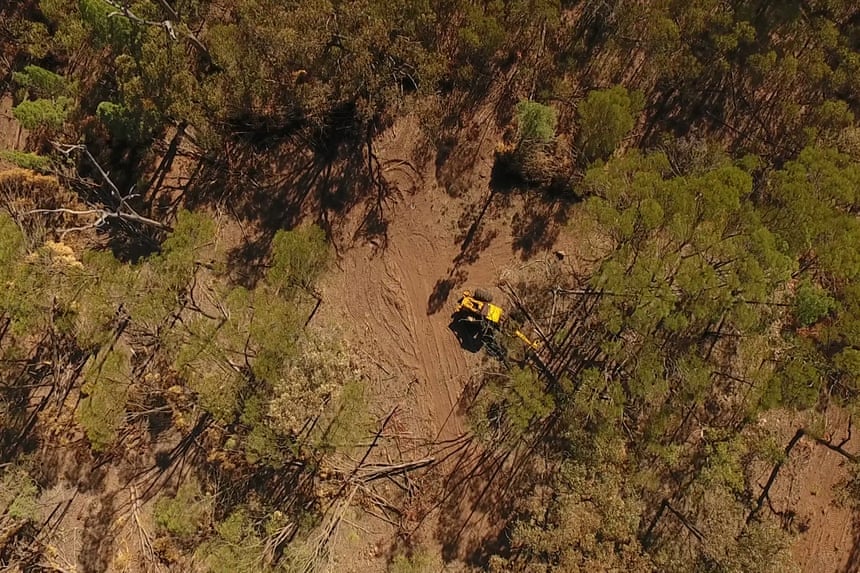 A cypress/eucalypt forest being bulldozed under the ‘thinning’ code in western Darling Downs in Queensland in May 2017. Photograph: WWF Australia

Daisy Barham, from the Nature Conservation Council of NSW, says the final set of laws and regulations released are even worse than those that caused the land clearing crisis in Queensland. “There are some really extreme elements in the NSW laws that don’t even feature in the Queensland laws,” she says.

Barham says the worst is the “equity code” which leaves few controls on clearing of properties under 100 hectares, and where protected vegetation makes up less than 10% of the property.

Analysis by WWF shows that could allow clearing of 8m hectares, or 38% of the remaining trees in the state, under that rule alone.

The changes took effect in August 2017 but so far the government has refused to release data on how much clearing has taken place. In fact, official state data hasn’t been released since 2013-14, when about 30,000 hectares of trees were cleared in NSW.

The area being cleared in there may seem small relative to Queensland, but NSW has a much smaller amount of remaining vegetation, with clearing there starting much earlier after colonisation.

“Only 9% of NSW is in a healthy or near-natural condition,” Barham says. “We simply don’t have much left to lose. That is why every bit of clearing in NSW is so important.”

Meanwhile, further north, vast tracts of land are being earmarked for clearing. In the relatively lawless Northern Territory, approvals for land clearing have jumped more than tenfold in the past two years, compared with the preceding 12 years, according to figures from the NT government analysed by the Wilderness Society.

Some of the clearing approved for single properties in the NT is almost unimaginable in size. A property called Tipperary station has a total of 50,687 hectares approved for clearing through a number of separate applications over the past six years, an area almost 10 times the size of Manhattan on one property.

David Morris, a lawyer who was chief executive of the Environmental Defenders Office NT until earlier this year, says the overarching feature of the Northern Territory’s land clearing is the lack of regulation.

“It’s a totally inept regulatory regime,” says Morris, who is now chief executive of the Environmental Defenders Office NSW. He says land-clearing projects go through an environmental assessment framework, which the government has admitted is inadequate. “They’ve committed to reform it but in the meantime all approvals go through this very poor assessment regime.”

In addition, major land-clearing proposals that occur on pastoral leases are assessed by a body called the Pastoral Lands Board, which adds further problems.

“It is made up of four pastoralists and one rangelands scientist,” Morris says. “There is a very clear trend of increased approvals of broad-scale land clearing in the Northern Territory. And there is a regulatory regime that is incapable of dealing with the individual and cumulative impacts of that clearing.”

“Having a board full of agricultural business people as the ultimate decision maker is mind-boggling,” says Glenn Walker, a Wilderness Society climate campaign manager. Glenn Walker, adding: “The NT has the worst regulation for deforestation of any jurisdiction in Australia.”

And the spread of the land-clearing crisis doesn’t look set to stop in the NT. Some of Australia’s richest graziers are establishing cattle stations in Western Australia, and making claims for greater access to resources in the pristine Kimberley.

Other states have their own clearing tragedies unfolding: some of Australia’s most majestic and oldest trees are being cut down for timber by a state-owned company in Victoria, which has even less left to lose than NSW. And Tasmania has just signed up to allow more logging in its national parks until at least 2037, a move NSW and Victoria are considering following.

Combined, eastern Australia is considered a global deforestation hotspot, the only one in the developed world. According to analysis by WWF’s Martin Taylor, Australia is likely to lose 3m hectares of trees in the next 15 years.

And all that is putting things Australians care most about under threat.

WWF analysis estimated that 45 million animals are killed each year in Queensland, just from the bulldozing of their habitat. “People have very strong feelings about cruelty and mistreatment of animals,” Taylor says. “So what must they think of that then? That we’re bulldozing 45 million animals to death every year?”

Both in Australia and around the world, habitat loss is by far the biggest threat to animals facing extinction.

Africa’s lions threatened with extinction by villagers bent on revenge

Adrian Blomfield, mbirikani, kenya The Telegraph 23 June 2018 The poison is supposed to be so fast-working that the locals call it “Two Step” — because “you take two steps and drop dead” — but […]