Scientists have found a record amount of plastic trapped in Arctic sea ice, raising concern about the impact on marine life and human health.

Up to 12,000 pieces of microplastic particles were found per litre of sea ice in core samples taken from five regions on trips to the Arctic Ocean – as many as three times higher than levels in previous studies.

Researchers at the Alfred Wegener Institute, Helmholtz Centre for Polar and Marine Research (AWI) found fragments of packaging, paints, nylon, polyester and cellulose acetate which is commonly used in making cigarette filters in every sample they took in 2014 and 2015.

The findings come amid growing concern about the scale of plastic pollution which experts have warned risks the near-permanent contamination of the planet.

Previous research estimated that at least 1tn pieces of plastic had been frozen into the Arctic ice over past decades, making it a major global sink for plastic pollution, many times more concentrated than the well-known great Pacific garbage patch.

But Dr Gunnar Gerdts, whose laboratory made the measurements, said his studies showed the problem was even more severe, with some of the particles only 11 micrometres across.

“That’s roughly one-sixth the diameter of a human hair, and also explains why we found concentrations of more than 12,000 particles per litre of sea ice – which is two to three times higher than what we’d found in past measurements.”

The study was able to identify not only a record amount of plastic but also its potential source – from degraded fishing equipment to plastic pollution that has travelled thousands of miles on ocean currents.

One of the study’s authors, Dr Ilka Peeken said: “The high microplastic concentrations in the sea ice can not only be attributed to sources outside the Arctic Ocean. Instead they point to local pollution in the Arctic.”

The scientists warned that the implications of this level of plastic pollution – for marine life and human health – were unknown.

Peeken said: “No one can say for certain how harmful these tiny plastic particles are for marine life, or ultimately also for human beings.”

Marine plastic pollution is a huge problem, with an estimated 5tn pieces of plastic now floating in the world’s oceans. The plastic is frequently mistaken for food by fish and birds, causing damage to life throughout the seas and entering the human food chain. 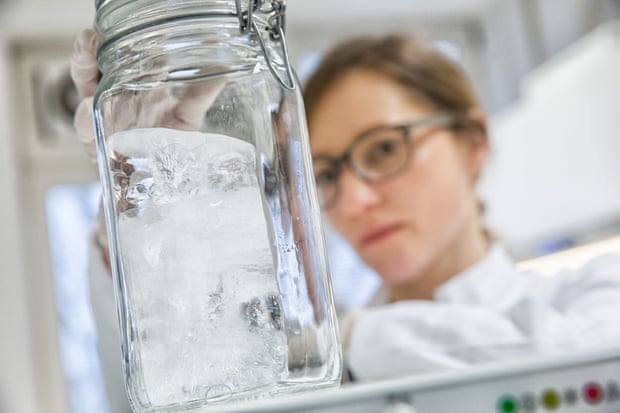 Today’s study found record levels of polyethylene in one area thought to come from the massive “garbage patch” in the Pacific Ocean. In another it found high levels of paint and nylon particles pointing to increased shipping and fishing.

The study also found that so much plastic is now stored in Arctic sea ice, which then moves and melts, that it has become a significant system for transporting plastic particles around the region.

“Microplastic particles were found throughout all cores sampled … It suggests that microplastics are now ubiquitous within the surface waters of the world’s ocean. Nowhere is immune.”

In Bali, young people lead the fight as a plastic plague threatens paradise

Bali has long grappled with plastic pollution both on land and in its seas. With the problem growing more acute, local organizations and youths are spearheading the fight against plastic waste. Words by Johan Augustin; […]