Looking down into the water that lies beneath the ramshackle houses of Sihanouk, Cambodia, it is hard to imagine that the sea is there at all. Instead, there is dense layer upon layer of plastic waste clogging the water, piling up around poles that support the wooden homes, carpeting the beach. 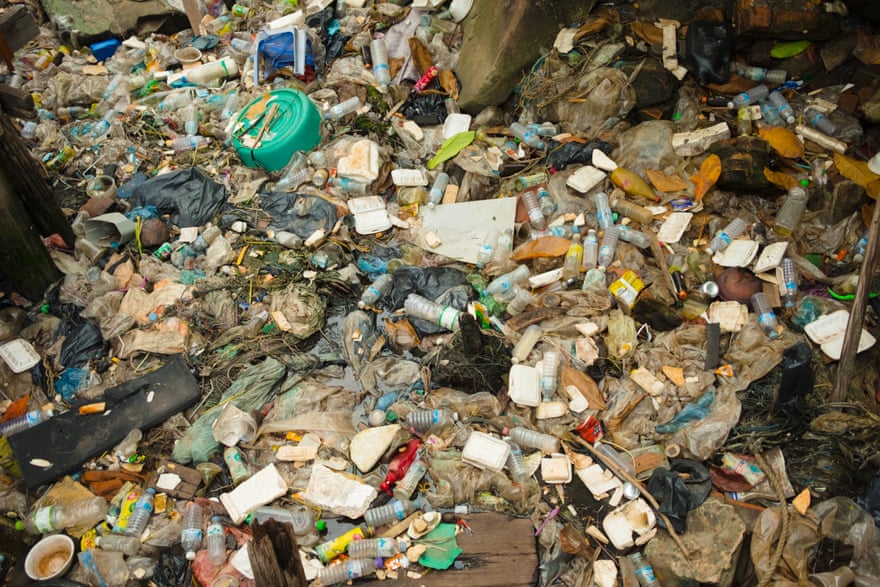 New images of from Sihanouk, in the country’s south west, depict in horrifying detail the extent of Cambodia’s growing problem of plastic pollution and how the tide of unbiodegradable rubbish has become part of the fabric of the lives of communities living in poverty. 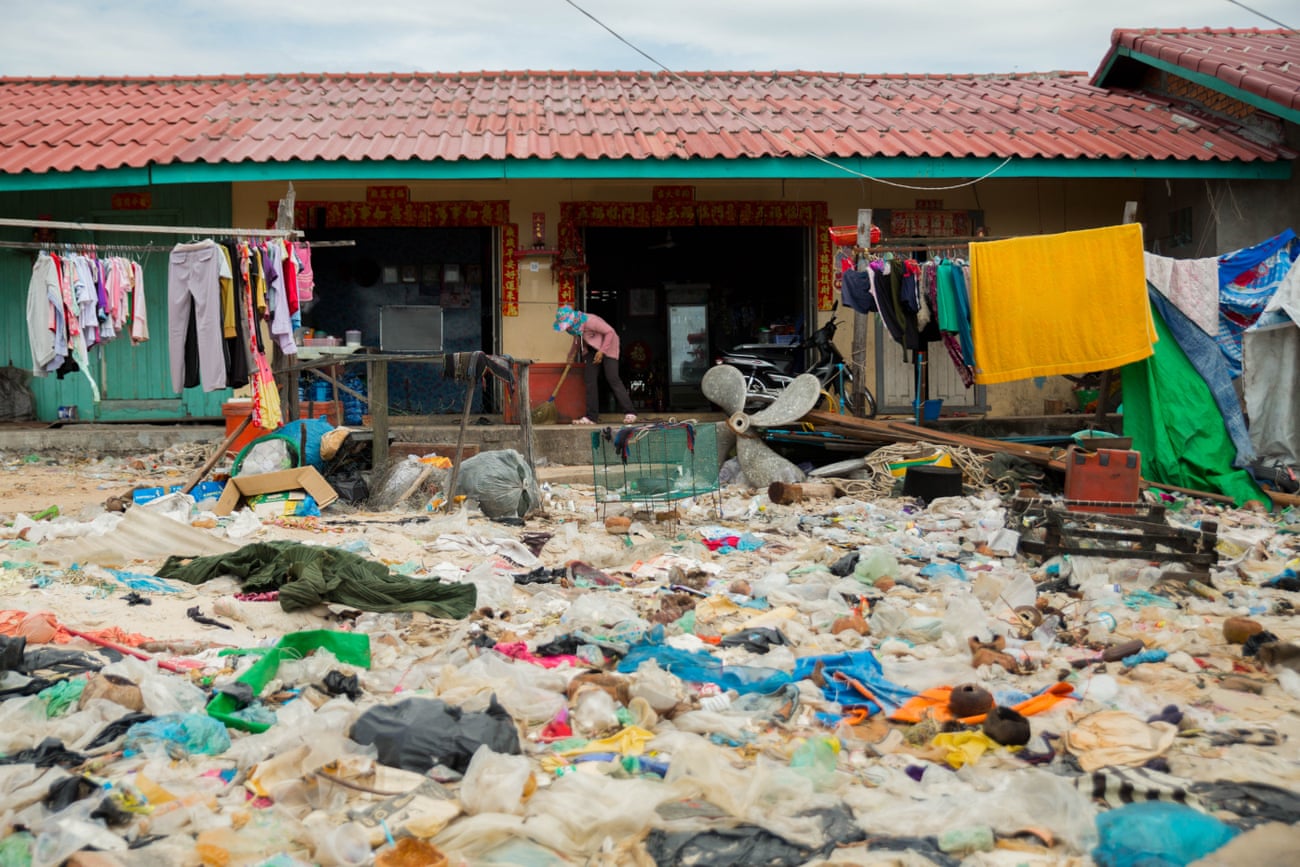 A woman sweeps her restaurant shopfront

Photographer Niamh Peren said she had been “gobsmacked” at the levels of plastic pollution that littered the waters and wharfs of Sihanouk, but emphasised that these mountains of waste also told another story: one is often neglected in the current global discussion around plastic, where poorer countries are often accused of being the biggest culprits in terms of generating plastic waste.

“There seems to be no empathy for the fact that for the people living in Sihanouk, there isn’t a water filtration system,” said Peren. “Their tap water is so dirty and undrinkable, that to stay alive they have to buy bottled water and then live among the rubbish it creates because there’s nowhere to put it.”

Over the past 15 to 20 years, Cambodia’s water system has improved faster than most of its regional neighbours, though sanitation efforts have mainly been centred in the capital Phnom Penh. However, according to Water.Org, about four million people in Cambodia still lack access to safe water, leaving them with no alternative but to buy endless bottled water, perpetuating the environmentally destructive cycle. 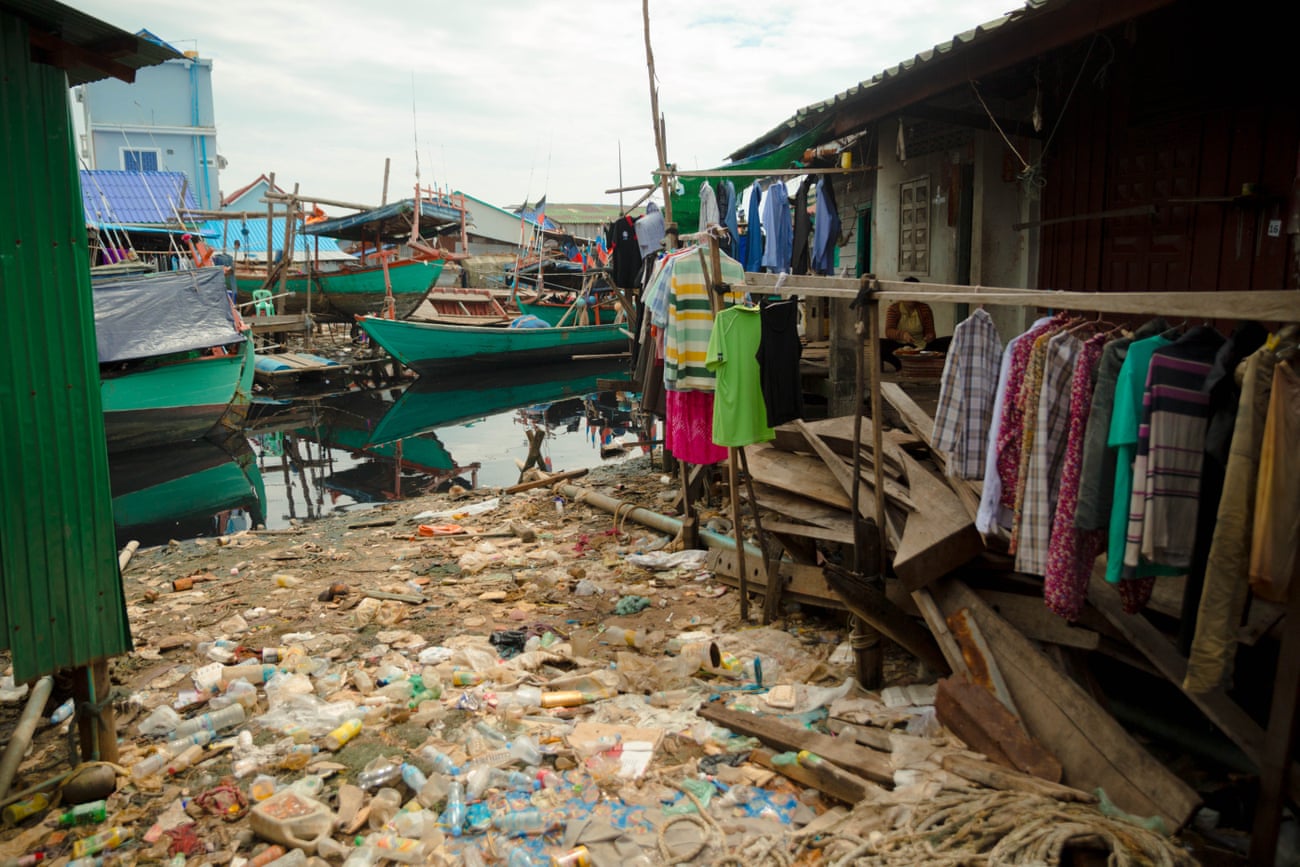 The view from a home on the wharf

Peren added: “There’s a total blame game that goes on about who generates rubbish and all this plastic but it’s a human story at the end of the day because this plastic waste that all the people here live amongst is unavoidable- they are not about to feed their babies the black muddy liquid that comes out of the taps, it’s poison.”

With no systemised waste collection service in the area, – almost every plastic bottle ends up in the water below, along with most other rubbish. With hundreds of families living in these houses on the water, the daily rubbish build up is enormous.

Peren described witnessing fishing boats coming into the wharf after long trips and dumping months of rubbish straight into the water and families living in the shanty houses on stilts doing the same with rubbish from their homes, the majority of which was often plastic packaging and bottles.

The plastic bags which also make up the dense blanket of rubbish also speak to Cambodia’s issue with consumption of single use plastic. In urban areas, each person uses an estimated 2,000 plastic bags annually, 10 times more than consumers in China and the EU, and an average of 10m plastic bags are used every day in Phnom Penh alone, according to anti-poverty organization ACRA in 2015. 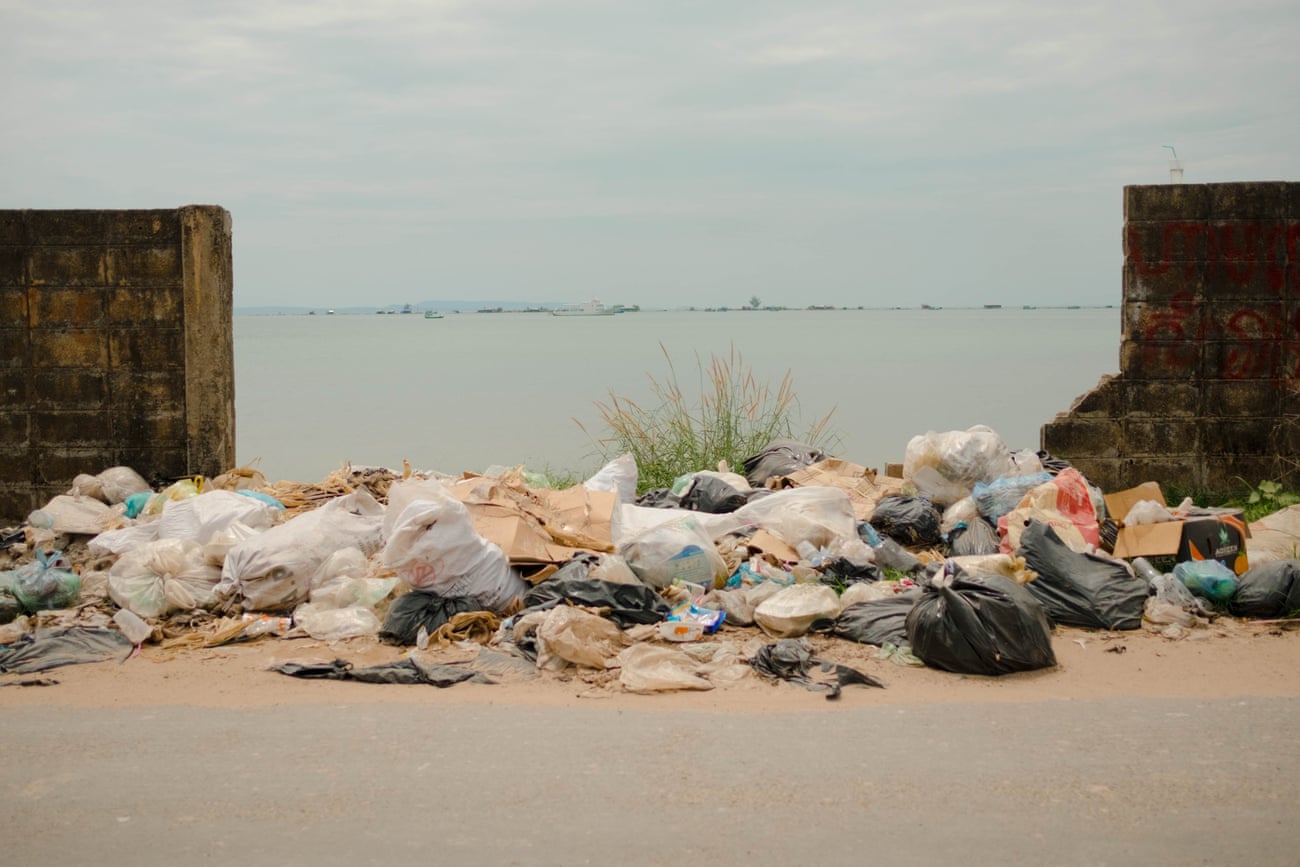 Garbage near the roadside in Sihanouk, Cambodia

Nonetheless, in comparison, Cambodia is not as big of a plastic polluter as its Southeast Asian neighbours Vietnam, the Philippines and Indonesia. These Sihanouk images follow a recent video by British diver Rich Horner which went viral after he documented swimming through a blizzard of plastic pollution in the seas off Bali.

Peren said the residents of Sihanouk were caught in a harsh cycle that was being repeated all across the poorer communities in Cambodia.

“If you don’t have anyone collecting it, if you don’t have any means to stop it, then this is the reality of what will happen and keep on happening,’ she said. “Every river, every lake just filled with mountains and mountains of plastic as is already the case all over Cambodia.”

Turning the tide on plastic: Creation and art from waste

earthrise goes to Canada and France to look at ways of dealing with the plastic pollution crisis. 12 Jun 2018 11:24 GMT  Cheap and versatile, plastic is used for everything. The problem is, it’s also […]

@BenSmee       Fri 11 May 2018 05.10 BST    Prosecution seen as key test of Queensland’s ability to hold mining companies to account The failed Queensland energy company Linc Energy has been slapped with one […]

AL JAZEERA 2018/03/10 Hola is aiming for the Loyalty Islands as a weaker but still damaging storm. Tropical Cyclone Hola was officially named on Tuesday as it attained sufficient wind strength to pose a threat. […]